With McCarren Park Pool soon becoming a place where one will hear children splashing in the water instead of hipsters sighing whilst listening to their new favorite band, the search is on for a new outdoor concert space. Of course, the venue simply wouldn't do unless it was in the mecca of indie rock, Williamsburg/Greenpoint. 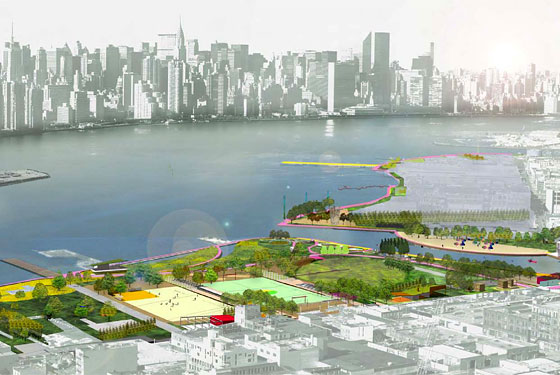 NYMag reports that "a leader of the community board in North Brooklyn says the city can set up a parking lot along the waterfront between North 9th and North 10th streets for live music as early as the summer of 2009." Evan Thies, head of the board's environmental committee (and running for city council), says the space can be acquired and cleared within 18 months, and can become a sprawling 28-acre waterfront park. One immediate hurdle for this proposal is another proposal for a large underground Transgas power plant built at the Bushwick Inlet. There's a meeting regarding the latter on March 20th, and in the meantime you can vote for the park here.

Last November community leaders announced a state legislation to force TransGas Energy from their neighborhood. "The legislation would cut through red tape TransGas has masterfully wrapped around its unpopular bid for a 1,000 megawatt power plant, and force the property to be given to the City so that the Bushwick Inlet Park can be built."

Wonder if the residents of the new luxury condos sprouting up in that area would prefer loud concerts or a power plant?