The Broken Angel house in Clinton Hill, which long ago was transformed into a livable sculpture by longtime owner and artist Arthur Wood, is just a regular old building now, and any remains are about to be transformed into a condo. We knew this was coming, but it still stings.

Last year Wood, who purchased the house in 1971 for $2,000, was evicted. This came seven years after a fire at the home and the long legal battle with the city which ensued. Following the fire, the city claimed the building was unfit for human habitation. There were a number of attempts to save the building (which famously appeared in Dave Chappelle's Block Party), as well as hopes of bringing it up to code or turning it into a museum. Alas, condos beat out any unique solution on the table. 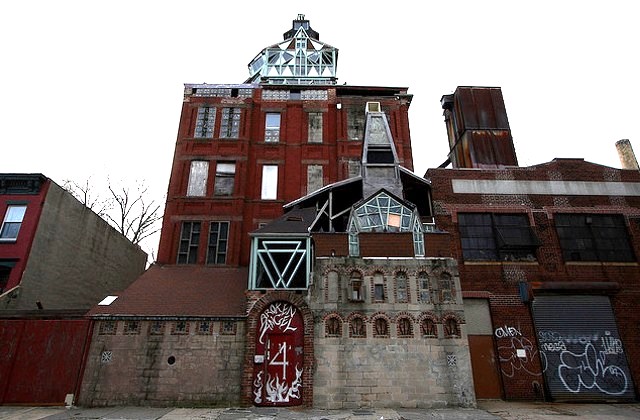 According to DNAInfo, Alex Barrett of Barrett Design and Development bought the property for $4.1 million along with the property next door. The church-like facade that Wood built has been "reduced to rubble," and the condos planned for the site will be complete in 2015.

What do locals think? One 13-year-old named Kathryn was walking by the site this morning, and told us, "I don't really like it [the construction]. I've lived here for a long time and [Broken Angel] was really unique, so I don't like that they're tearing it down."