Like many who've passed through Brooklyn Bridge Park on a sunny summer day, we've marveled at the proud exhibitionism displayed by the sunbather known to all as "Thong Guy." The scantily clad gentleman has, for years, been the center of considerable fascination, with Flickr photos devoted to tracking his indelible appearances. But in recent months, several Thong-watchers at Gothamist HQ became concerned when Spring melted into Summer without a single Thong Guy sighting.

And so we put out an APB on Thong Guy wondering if he'd run out of thongs, or simply withdrawn from the spotlight. We were, uh, immediately rewarded with a deluge of recent Thong Guy photos in the tips inbox (see below!), and days later we finally encountered the man himself, proudly thonging it on Friday afternoon in a quiet corner of Brooklyn Bridge Park. After we agreed not to videotape the encounter or take any photos of his face, the mysterious Thong Guy agreed to speak on record with Gothamist. Here is our exclusive interview.

Are you aware that you're a bit of an internet phenomenon now, because of your choice of sunbathing attire? I wouldn't call it that.

I guess we're just curious because it's distinctive. See, now, this is not the way you presented your article.

Well, we have been doing stories on how people beat the heat, and you have, I guess, the most distinctive attire. We've done previous stories on the issue of whether should men wear flip flops in New York. Also called "thongs."

Oh yeah, that's true. Although it's less popular to call them "thongs" now because people never know what you're talking about anymore. Everybody has a camera on their phone now, and I often see people taking photos. 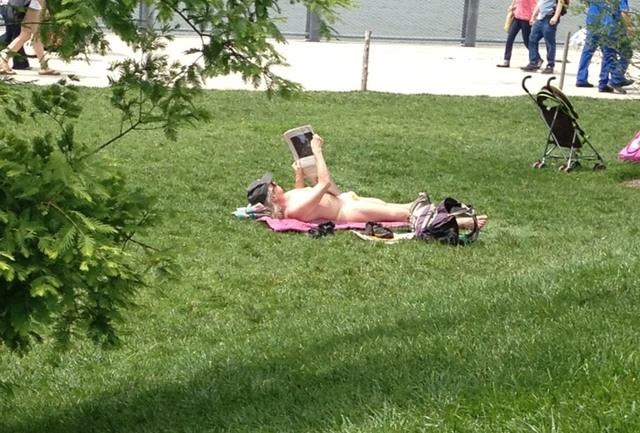 (Reader submission: "Fear not, Thong Guy is alive and was baring his banana hammock in Brooklyn Bridge Park as recently as June. These pics are from 6/3. No haircut from what I can tell, and same neon thong.")

So how long have you been sunbathing out here? How many years? Since the '90s, in Manhattan and Fulton Ferry State Park. It's changed a lot. It's addictive, I think, lying in the sun and being comfortable, and I don't understand people who say: "Oh what's he use, SPF 100?" I didn't even know that they made 100. I have 85 for my face, and 50 [for my body]. Obviously I do get tan, but you know, you see people on nude beaches putting on sunblock. You don't necessarily want to get sun damage, you know, it's just being comfortable. So I guess it doesn't bother me, as long as I don't get arrested.

So if people don't like it, or they think it's a spectacle, I don't really care what people think, and to the extent that it's a statement, well you know I just think that people are uptight. Generally Americans are uptight.

Are you from America originally? Yeah, I'm from West Virginia.

So have people come up to you and asked you to put on a pair of shorts? Well, there are times that I've moved or that I've put on a pair of shorts for a while, but back in Fulton Ferry Park I would get there before anyone else. Then gradually it got built up and there were more people around and you get used to it. But I just figure, I was here first. I've seen other people wear thongs, but over the 15 or more years I guess I'm about the only man I see here in a thong in the Brooklyn Bridge Park area [laughs]. But there have been other ones; I'm not the totally only one, but virtually the only one. There's been one or two others down through history. 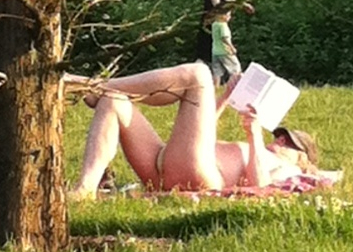 (Reader submission: "My group of friends and I watched in terror as he turned over to sun both his front and his ample butt cheek-age. He also took time to get his exercise in--see photo for THONG MAN crunches--and was even assaulted (with a purse) by woman who did not want her children exposed to his abundant package.")
And they eventually fell by the wayside, and you're the last Thong Man standing?

Yeah, I guess. There was one person that used to be there pretty regularly, besides me, a long time ago.

Any problems with the police? There have been times...well, one time, the cops came down and said somebody saw me and they thought I was naked, and obviously I'm not actually naked. They have different attitudes; sometimes they say "Oh I get it." They wouldn't arrest a woman in a thong, so why would they arrest a man? But this was the freaky thing: One day a female Parks police official that I've never seen before approached and started saying, "Ma'am, you really can't..." And she said "Oh, you're a man, ok." I guess she thought I was a woman going topless.

I was going to correct her and say there's a woman that's been going around Manhattan topless to make a statement about this recently. Because in '02, the Amy Gunderson case, the city had to pay her, like, $10,000 for wrongful arrest.

So you've never been forced to put shorts on? Um, yeah. Over the 15 or more years there have been times when the cops got, you know...they were threatening, it got a little hairy so I put my shorts on. But I don't think they ever had a legal leg to stand on.

Are you retired? No. 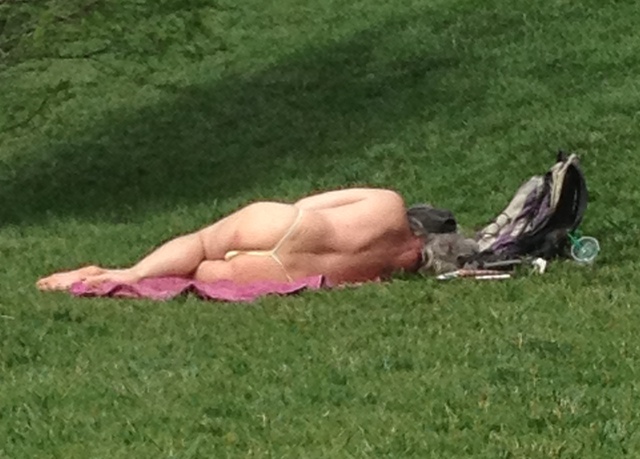 (Reader submission: "Just felt as though it were my civic duty to alert everyone.")

What's your profession? I don't want people tracking me down. Why do you ask if I'm retired? Because it's Friday?

I don't know, it just seems like... I'm involved in magazine production and editing, and I have a tradition that I'm not in the office on Fridays. I'm a longtime employee of the same place, and in the summer I get a lot of time out of the office. We go bi-weekly, but that, you know...well there's no such thing, now that we're so involved with the web, there's no such thing as a bi-weekly magazine anymore.

So do you have multiple thongs? A brand preference? Surely there's more important stuff to write about?

There is, but people don't want to click on the important stuff. And you're kind of like a New York character, and you're certainly more interesting than that hack the Naked Cowboy. You have to buy new thongs when they start wearing out. The one that I used to buy all the time, they don't make it anymore, so I don't even...

So where do you get them now? Online. Mail-order sometimes.

Have you ever had anyone confront you in a really hostile way? Someone who was really in your face? Occasionally. But then there are other people who are very nice. They would ask if they wanted to take my picture, you know.

Do you say yes? Yeah. You know, the people that got really upset are in the minority. But they're a vocal minority. 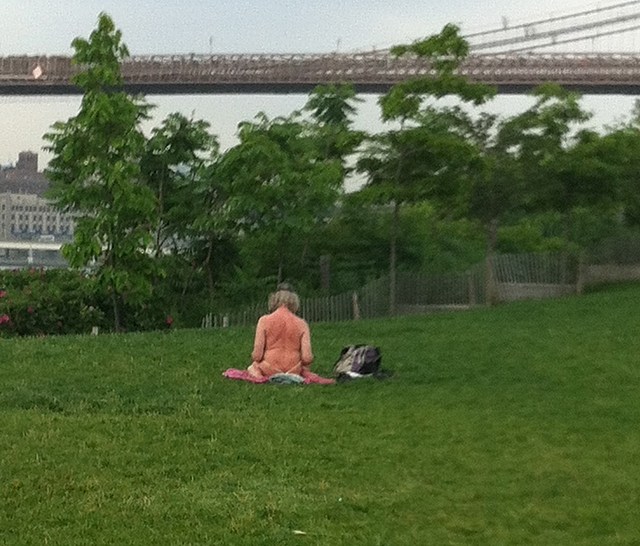 Can you recall one specific instance that really sticks out in your mind? No, not really. I mean, it's not really that interesting of an anecdote. I think it's boring to talk about.

But people are fascinated. Well, that's their problem. I want to get out of here to the beach. It's so hot, and I like to go to the beach. I like to start early in the morning so I don't get hot walking. I have to walk past Field 3, the bus lets you off at Robert Moses stadium and you gotta walk down past Field 5 to get to Fire Island. It's a national seashore, it's called Lighthouse Beach. It's clothes-optional.

Is there anything you'd like to say to critics who feel that your attire is too revealing for a park? Um. No.

Do you have any other hobbies? Well yeah, I mean this isn't really a hobby. I get the paper read.

So it's just something that's very personal to you? It seems like you're not trying to make a statement the way the topless woman is. You're not as eccentric as I thought you would be. Oh, really?

No. This is a city where everyone's shoving each other out of the way trying to be more eccentric. Yeah, you see I've never had any trouble being different. I've never had to try anything different. It just stopped bothering me if I was different in some way, so if I happen to make some statement by just being myself it's not a performance art or that sort of thing. I don't want to get into people putting things online who want to make you change your behavior by shaming you out of doing something or something like that. I don't know what kind of effect they want to have.

Yeah, the internet has a real potential to make people feel ashamed of their actions because they can be recorded doing anything. I like to write, I used to keep a journal every day. But before blogging became a thing that everybody does, it occurred to me that if you have a diary that's really secret, you might have a different relationship to that than you would to something that's online where everybody and anybody can see it. You might have a key to your diary, or you let your best friend or your wife read your diary sometimes like this big great favor. People are exposing all their thoughts, supposedly, online. What's a body? You don't really expose anything by exposing a body. I don't think this necessarily encourages self-exploration.

People put up a lot of things, but they won't really put their deepest thoughts or feelings there. And because this is when they are meditating in this way. This is their time to talk to themselves, in a way. But they're doing it letting the whole world listen in. I think that could keep them from having certain kinds of thoughts, or going in certain directions and having a certain kind of self-critique, because it's all for this imagined audience.

Well, thanks for your time, I don't have any more questions. Oh, good.

#interviews
#summer guide 2012
#thong guy
#original
Do you know the scoop? Comment below or Send us a Tip