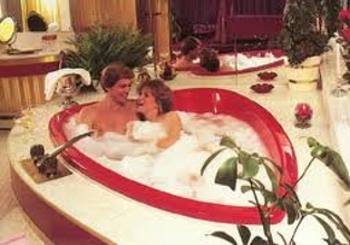 In the latest trend sweeping the borough, a real estate "insider" declares that Brooklyn residents are making a mass exodus to a magical land called The Poconos—that place where your parents went on their Honeymoon. The Pennsylvania "hot spot" is just 90 minutes from New York City, and Christine D’Amico of Toll Brothers developers says, “at some point it turned into a primary location as opposed to just a weekend resort type of area." Over the past couple of years, half of their Poconos sales have been to buyers from Brooklyn.

D'Amico told the Brooklyn Paper—who are helping to hype this whole thing up—that many can afford a brand new four-bedroom home at what they're paying in rent in Brooklyn. And if you need to commute to the city, there's a bus service that will shuttle you to Port Authority every morning for the rest of your life. Doesn't it just sound like a DREAM? And in August, they'll have a Phish festival!

According to a quick scan of Craigslist—where listings declare: "Move Here... We have IT all... No need to leave home!"—you can rent a 3 bedroom home for around $1400 (even the ones with new carpeting!), and homes start at around $120,000 to purchase.

Real estate agent Kriss Ferrara moved from the city to the Poconos (where we're guessing she holds a few listings) and told the paper, "It’s almost like a bedroom community for New York City... After several years of living in New York people can’t take it any more and have to get out.” But not everyone seems 100% about the land of champagne glass hottubs, sources say one solitary tear came to the eye of a former Brooklyn resident while she told the paper: “I guess sometimes I wish I could just walk to the store, or something like that."

#brooklyn
#mount airy lodge
#poconos
#real estate
#trend alert
Do you know the scoop? Comment below or Send us a Tip