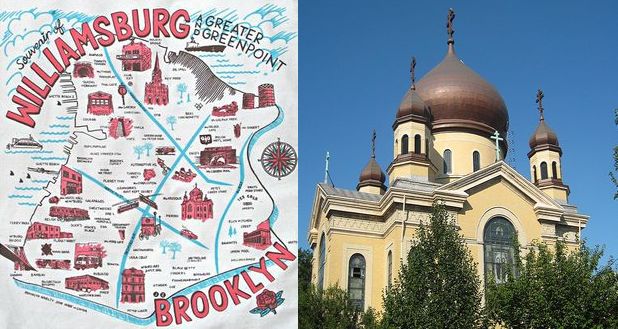 The two Greenpoint artists behind the Brooklyn Novelty brand will finally be able to fill up the currently empty press section of their website. Derick Holt and Milton Carter started the brand this year with a focus on "localized souvenirs to capture the spirit of the neighborhood while paying homage to tourism's golden age." Their first project? Map Williamsburg and Greenpoint for an adorable little tote bag that not only points out important landmarks like the Turkey's Nest, but also captures the "cultural nuances of our time." Sounds innocent enough, right? Except they had to go and bring some "ironic hipster humor" into the mix.

The NY Post points out that the Russian Orthodox Cathedral, located near McCarren Park, is labeled "The Mosque" on the map (oh yes, they did). They tell the paper, and in turn the Russian Orthodox community, that everyone calls it that! You know, everyone they hang out with at the Turkey's Nest. Church deacon Igor Ksynyuk, however, finds it offensive, and notes that "If someone didn't know it was a joke, he might think our church wants to offend Muslims somehow."

The designers stand by their bag, saying, "If you were new to the neighborhood, you wouldn't know what [the church] was, but you'd know the domes." You know, how like when hipsters get mad when they're labeled hipsters...but what else are you going to call the young artist living in Greenpoint designing ironic tote bags? Buy yours now!