Brooklyn musician Drew Henkels, 28, met his bride-to-be while on tour with his band in Australia. Chelsea Mose was working at the bar, and, as he tells New York Stories, "it was like a laser beam of attention, where I immediately zoned into her and was just really excited about her." The two young lovers fell for each other fast, and in April Mose joined him in Bed-Stuy, where they fell faster. And so, at the beginning of June, Henkels scaled a billboard next to the BQE and popped the question in giant black letters. Suck on that, Port Authority Bus Terminal proposal guy. 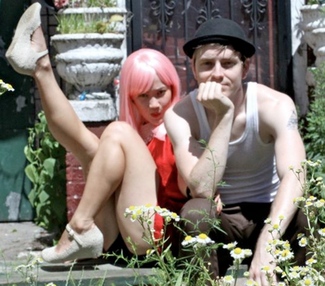 "I really wanted to do something epic," Henkels tells New York Stories. "Chelsea's the kind of girl that you have to win over. You have to scale something large and show her you're serious." He actually made multiple attempts to tag the question, including one billboard that was completely free of graffiti. But after trying to scale it twice and nearly breaking his neck in the process, he set his sights on an easily-accessible billboard down the block. And so the married man's life of diminished expectations begins.

To tag the chosen billboard, Henkels "scaled a fence, climbed on top of a rusted out bus, and lassoed a rope around the billboard's ladder." The billboard has no guardrail, and Henkels says he would have easily broken both legs, "at best," if he fell. Fortunately, he didn't fall, and the cops who drove by didn't bother him. And when he walked Mose over to the billboard, her answer was yes. (He had to dissuade her from climbing up there to paint her reply for the world to see.)

Somewhere in Brooklyn, A LASKA and RAMBOY X are eagerly checking the mailbox for their wedding invitations.

#bed stuy
#brooklyn
#graffiti
#marriage
#marriage proposal
#tagging
#wedding
Do you know the scoop? Comment below or Send us a Tip