"Brooklyn Is Back" Is Back In The Headlines Again 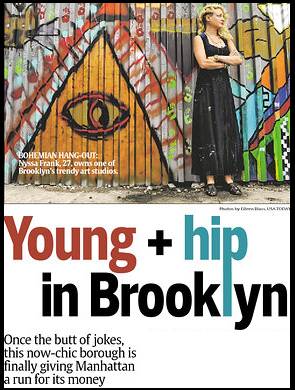 The latest newspaper to tackle the "Brooklyn is back" "story" is USA Today, which declares on the front page that not only is the borough back, "it's where it never was" before. They're really taking this Brooklyn thing to the next level.

To support this radical new discovery which no other media outlet has previously explored, USA Today talked to a cafe owner in Ditmas Park ("People I know from London don't want to go to Manhattan. They want to come to Brooklyn."); they made a list of all of the people who probably love Brooklyn (people from Helsinki! Indie Rockers! Sports fans! Etc!); they mention bold-face products like artisanal pickles and home-made granola; they used the H word and also phrases like "new Bohemia" and "Paradise lost and found." Somewhere in the basement of a newsroom in Virginia a group of Project X monkey interns are overdosing on Blue Bottle slow drip coffee while typing up all of these trend pieces.

Let's get through this latest Brooklyn lovefest together. To get into the right mindset, close your eyes and imagine a real life Parisian whispering the words "Très Brooklyn" into your ear (they have been known to utter the phrase, says USA Today)—do you have goosebumps that only come from the realization that cultured foreigners appreciate our gentrified neighborhoods?

Meet Kriss Roebling (yes, of those Roeblings): he just loves living in DUMBO, where he's "two blocks from dropping a kayak in the river and 12 minutes on a bike from the East Village." But Roebling isn't the only one who loves affluent Brooklyn neighborhoods—so do celebrities like Anne Hathaway and Maggie Gyllenhaal! And grown men and women who love hitting each other with cardboard tubes!

But be warned, newly-inspired gentrifier, as chic as the borough can be, Brooklyn isn't all rooftop gardens and overpriced flea markets—in fact, USA Today reports that 40% of New York City's murders are in the borough, but la la la those bad things only happen in areas where there isn't artisanal mayonnaise anyway.

But let's not be too hard on reporter Rick Hampson; Brooklyn looks so much more magical when you're living in Fair Lawn, NJ.

#brooklyn
#brooklyn is back
#gentrification
#usa today
Do you know the scoop? Comment below or Send us a Tip