New York lost one of home grown greats on Monday when pop artist James Rizzi died in his SoHo studio. He was 61. Though he found his biggest successes in Germany and Asia, Rizzi was a Brooklyn-born artist and sculpter whose unique sensibilities you might remember from such things as the 1996 Summer Olympics in Atlanta (where he was the official artist) or the video for the Tom Tom Club's Genius of Love (and the cover of their first album). Not to mention his Cows on Parade cow, or his personalized VW Beetle.

According to his dealer, Rizzi died of an existing heart condition. Before getting his break at an exhibition at the Brooklyn Museum in 1976, he studied at the University of Florida in Gainseville. According to his website the prolific artist was perfectly fine with being known as 'that guy who draws buildings with faces,' or 'the guy who draws those birds.'

Most recently Rizzi was working on a book on "his" New York and made this lovely video tour of SoHo, where he lived for the last 40 years of his life. In fact, as he explains, he really got his start selling his work off the street on West Broadway:

And, just because, here's a 2010 piece Rizzi did called "Times Square - Everyone Should Go There." It never looked so happy. 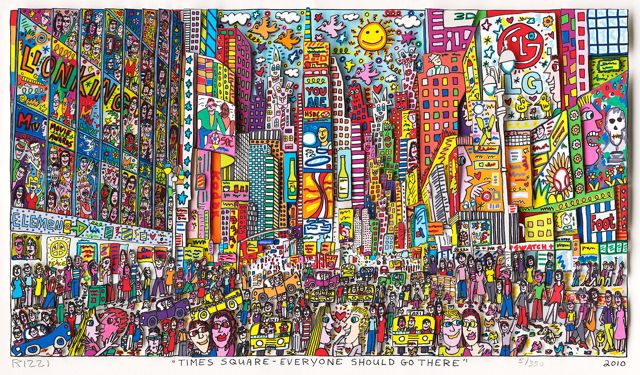 "Times Square - Everyone Should Go There," by James Rizzi