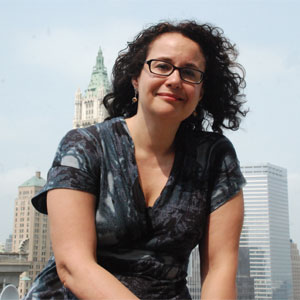 Brooke Gladstone is the managing editor and co-host of WNYC’s On the Media which is heard throughout the country on National Public Radio stations and as an internet podcast. She has won several awards, including two Peabody Awards, for her coverage at NPR, which she joined in 1987. She has been a foreign correspondent for NPR covering the reemergence of Russia out of the Soviet Union in the 1990s. She recently returned to Russia to report for On the Media about the current state of the Russian media and the challenges it faces. The result of her visit aired on the June 22nd edition of On the Media.

Tell us about On the Media.
On the Media has had a long and interesting life, actually several of them. It was launched in '95 as live local call in show, with Alex Jones as host, and then it became a national show with the brilliant Brian Lehrer as host. Then, Dean Cappello, who was head of programming, asked me to come and help tweak the show, to see if it could grow nationally. So they hired me and Bob Garfield and expanded the production staff, put some more money into it, got NPR to pony up a little, too, and that's how this version of OTM came to be.

But, that is probably not what you meant by '"What is On the Media?" On the Media is our effort to function as the outsider's insider. In other words, all of us who work on the show are journalists. But I guess there is something in our collective natures that makes us feel somewhat outside the process, despite the years we may have spent within it.

So we hope that we can demystify the process. When we started six years ago, that was a taller order than it is now. Now, everybody and their maiden aunt can quite reasonably call themselves journalists if they choose to report something. They don't need to be paid for it anymore. Professionalism by dint of a paycheck is no longer what defines a journalist.

What would you consider a healthy media diet for New Yorkers?
For New Yorkers to stay informed, I would say listening to The Brian Lehrer Show and Lenny's show would be a really valuable thing to do. [John] Schaefer's show. I know this sounds like I am really sucking up to the station, but I have worked in public radio for a long time, and for a number of years in Washington. I've heard a lot of public radio and there is no other station like this. That's probably why it is the number one public radio station in the country.

That said, I also think you need to read The New York Times, you need to read the Daily News; and it really helps to read the Observer. I think it is worth dipping into New York magazine from time to time, but I don't know if it is a requirement. I think The Daily Show is essential as a digestif, if for no other reason. New York City often feels like a protectorate of the United States rather than part of it, and The Daily Show, which is of course produced in New York, makes New Yorkers feel less alone. A kind of Daily Show Nation. Or is that the Colbert Nation?

Covering the media has to be an interesting beat for a reporter.
It's always interesting to cover your own business, but the beat lacks something that is really, really important for reporters like me who like narrative. There's no story. What you are reporting on are trends, policies, perceptions, and studies. Where are the people? Where is the blood? What are the stakes?

Well there ARE stakes and that is something that we try to focus on a lot, what the stakes are - the continued health of an honest and independent press. But the media beat is challenging because it lacks the kind of hooks that some beats have built in. We spend a lot of time figuring out how to make the FCC interesting. Or FOIA. Rinse and repeat the process across a broad range of similar topics that we feel responsible for covering, but that are hard to keep interesting and fresh week after week.

How is working in public radio different and do you think other media focuses more on celebrity tinged journalism?
In terms of public radio, public radio benefits from a mixed of funding sources. The government is only about ten percent these days. There are corporations, there are
foundations, and there are listeners. Actually, the listener part is probably most important because it leverages the foundation funding and it's also a large percentage in its own right.

But public radio does not rise or fall on any single one of these funding sources, so that allows for more independence. That's why it does not have to spend as much time attracting people to the broadcast by covering celebrities and so on. Basically public radio is rewarded for going where there is less and less coverage. Which is why, while other news outlets are closing their foreign bureaus, NPR is opening MORE foreign bureaus and that sort of thing.

So, I am not saying that public radio people are any smarter, any more committed, any more moral, or any way better than anyone else; but the structure that has created public radio, though it has some big problems, enables the people who work there to do better long form journalism and focus on more important issues.

Do you have a favorite interview that you have done?
Oh boy! I have so much trouble with that kind of question. It always amazes me when people can come up with a favorite this or a best that.

The interview that is most on my mind at the moment is one that was in our Russia hour, that we did a couple of weeks ago, with the editor of Izvestia, which is a 90 year old newspaper, now and forever pro-Kremlin. We were in Moscow to report on the constraints on freedom of speech under Putin. He sat down with me for an hour and a half, the interview we boiled down to about nine minutes. He basically said, "here is why you guys are arrogant, here are why you guys don't know what you are talking about, here is why we find you guys amusing." I didn't try to win the argument, I asked the questions, I offered challenges, but I just let him lay it all out there from the Kremlin perspective. We weren't presenting him as a loony or a fringe figure, because he certainly was not.

I felt that this was the kind of interview that people would not hear anywhere else. That he would not be able to speak at length and so articulately about something that he had thought about a long time and felt so deeply, so that Americans could at least get it. Not agree with it. Not agree with it, but get it. So I would say that in the last year or two that is my favorite interview.

Do you miss being a foreign correspondent?
Oh yeah! For all the reasons I said it was hard to cover media, it was fantastic covering Russia [for NPR, 1992-1995]. Those guys are emotional and articulate and the stakes were so high and every day it was a whole new country. Also, I had to learn how to function in Russian, which was pretty challenging, and I loved that. But, there aren't that many stories like Russia in the early '90s. Would I want to be in France right now? No. Basically you want a place that's being shaken up. I really liked living overseas, but this has actually has been a great time to report on America, in terms of the shake up, but obviously, it's harder to distance yourself from what is happening in your own country.
Yes, I miss it. I miss the street reporting. I hope that the show gets to do more foreign jaunts so I can get out there and feel like I haven't lost those chops.

Please share your strangest only in New York story.
Oh yeah. Here is the story that got away. The story that I wanted to do when I was in the bureau, I just so wanted to do this.
I was walking down the street, it was in the 50s on the West Side, and there was this guy - he was big, black, and wearing big wooden jewelry and looked very surly - and next to him was a sign that said "Tell me off for a dollar". And I thought that this man was playing the part of a guy that maybe all these people in Midtown Manhattan, these white guys going to these offices are pissed off at. I was just shaking my head walking down the street and I went, "Oh my God! What am I thinking of? Maybe I can record this."

So I went back up to him and said, "Do people actually tell you off?" And he goes, "Oh yeah." And I said, "Don't you find it insulting? Doesn't it make you angry? Don't you want to yell back?" And he shrugged and said, "No. Why? They pay their dollar."

I said, "Do you mind if I record you? Are you always here?" And he says, "Well, I don't know if they will tell me off if you're here, but you can try." I went back the next day and the next day, I walked miles up, down and up and across that part of Midtown trying to find him but I never saw him again.

That is your classic only-in-New-York story for a radio reporter. God,I wish that I had recorded him.

Given the opportunity, how would you change New York?
Slightly less humidity, other than that I think it is perfect. Once my co-host [Bob Garfield] and I were standing out here on the roof and I said, "God Bob, I love this city." It wasn't that long after 9-11 and he looked at me and said, "Brooke, I wish I loved anything as much as you love this city."

But change the humidity, maybe one or two more bars where people can smoke - just one or two - and now that I think about it maybe I'd add a few things. Don't be so quick to get rid of those rent controlled apartments. Slow down their rush into the general market. We don't want the city to be just rich people the way it is in Paris.

And now the quintessential New York question- Mets or Yankees?
New York is a very diverse place, and although I fear what this may do to whatever fan base there may be for the program, I just don't follow baseball.