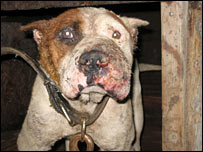 The Bronx DA's office is investigating Ralph Reyes, a Bronx man who was singled out by the New York Post last week as the center of New York City's dogfighting world. The Post was acting on information provided by the Humane Society of the United States, which has an Animal Fighting Task Force that investigated Reyes and dogfighting in the city, but abandoned its project when it was unable to get much cooperation from local law enforcement.

Reyes was allegedly breeding and training pit bulls in the basement of a residential building on Valentine St. in the Bronx. The animals were destined for bloody fights to the death that would draw crowds in the hundreds and prize purses in the tens and hundreds of thousands of dollars. When investigators visited Reyes kennel, it only contained two female pit bulls and two puppies. A dogfighting insider told the Post that the more valuable males would have been moved upstate until they could be sold, presumably after last week's article identifying Reyes.

The operator of Big Apple kennels said that he could have been shut down years ago when the basement facility was inspected by the ASPCA. One of the dogs with obvious fighting injuries was confiscated, but otherwise he was offered help with obtaining food or shots for the remaining dogs and wasn't cited for any offenses.