Broken Angel Is Gone, But You Can Help Fund The Family's Documentary 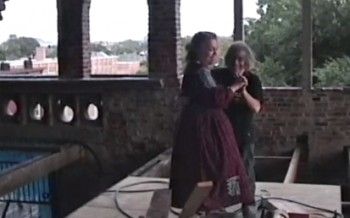 Recently what remained of the Broken Angel home in Clinton Hill was dismantled, and soon the lot will be home to condos. While Arthur Wood's vision has come crumbling down, his son Christopher hopes to at least preserve it on film. He just launched a Kickstarter for his project, which he hopes to raise $26,000 for, and explains:

I am also looking for footage, photographs and memories or experiences people had with this unique structure. Please help us pick up the pieces so that Broken Angel will live on. Anyone can submit footage or photographs without making a monetary contribution. I will release where to send the materials once the project is funded."

The video he's included gives you a glimpse at the inside of the home when it was still Broken Angel, which was always a work-in-progress. And if that last slow dance scene on top of the wooden boards doesn't get you...

Last year Christopher Wood said he had mixed feelings about the place, "Growing up here kind of sucked too at times, and it was really cool at times. Cops were always getting called because they saw a five-year-old kid running around the building. We had to hide every time the fire department responded to our wood stove … We hid in the closet with my sister. It's been going on for so long. At least it's coming to some type of conclusion. At least you have a point to move on from."

#broken angel
#christopher wood
#kickstarter
Do you know the scoop? Comment below or Send us a Tip
A new Gothamist is coming! We’ve moved comments over to our beta site. Click here to join the conversation and get a preview of our new website.