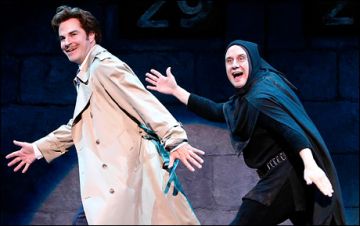 Young Frankenstein, Mel Brooks’s latest big-budget musical theater beast – rumored to cost over $16 million – has finally slouched toward Broadway to be born. It opened last night at the Hilton Theater; this morning the Times’s Ben Brantley shuffled out of the delivery room to tell us all about the freak of nature Brooks delivered.

Proud ticket buyers who shelled out the record-setting $450 for “premier seats” are probably going to want to put the cigars away; it seems there were a number of complications. From Brantley's review:

It’s as if the production had been built on the premise that its audiences would be slow on the uptake and hard of hearing, the sort of folks who would say: “That pun flew right by me. Could you repeat it a couple of times, louder?”

I laughed exactly three times. There are some enjoyable musical routines. (All right, my count is 2 out of nearly 20.)… It leaves you with a monster-size headache.

With a bit of creativity producers could cobble together a couple positive pull quotes for the marquee, such as “truly exhilarating”. Of course, they’d have to trim the other 17 inconvenient words that overshadow it: “There is one truly exhilarating number, though you have to sit through most of the show before it arrives.” And it’s not just the Central Arbiter that’s horrified by the spectacle; the New York Sun seconds Brantley’s booing:

It's hard to determine exactly where this latest attempt goes so grievously astray… It's as if the fruits of an early, not terribly fruitful brainstorming session were lavished with literally millions of dollars.

But maybe that’s not so bad either: “Fruitful!” – The New York Sun has a nice ring to it. For a somewhat contrary opinion, there's the Post. ("A great job.") And we'll see how long the show's star Roger Bart lasts – rumor has it that his back injury has Brooks considering pumping him with cortisone to keep him on his feet.