Broadway Strike All But Assured 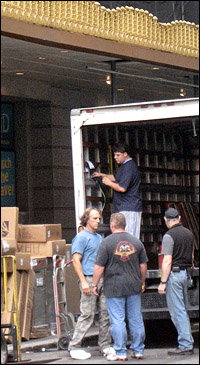 According to Broadway insider Michael Riedel, it’s not “if” but “when” the stagehands will go on strike – and “when” could be a soon as tonight! The long and contentious contract negotiations between the producers and Local One are now at an acrimonious standstill over changes to rules governing overtime pay, work assignments and the number of stagehands required per production.

Last night Thomas Short, president of the international union that must approve Local One’s vote to strike, terminated heated talks with producers. According to Riedel’s source, “there were a lot of ‘f--- yous’ flying back and forth.” Short immediately gave the go-ahead for Local One to strike; the union hotline (646-459-1916) now has this recorded message: “Dear Brothers and Sisters… The international president will advise [Local One] president Claffey on when the strike is to begin.” Riedel says the union is merely debating whether to strike before the weekend “or wait until Tuesday, out of fairness to ticket holders.”

Audiences for Broadway productions of Young Frankenstein, Mary Poppins, Xanadu and Spelling Bee needn’t sweat it; those houses operate under separate contracts with the union, as do Roundabout and Manhattan Theater Club. Anyone else holding tickets for Broadway’s 27 other shows should keep a close eye on Local One’s website before heading to Times Square. Of course this is pretty good news for Mel Brooks’s new turkey; after today’s scathing Times review he’ll surely be relieved to lose the competition.

Photo of Broadway stagehands by David Gewirtzman for Playbill, which has in-depth coverage.