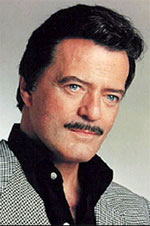 Musical theater star and lounge singer extraordinaire Robert Goulet died yesterday of pulmonary fibrosis while awaiting a lung transplant in an L.A. hospital; he was 73.

In the early 60s Goulet skyrocketed to fame through his performance as Lancelot in the smash Broadway hit Camelot. He soon became a seemingly timeless fixture on both the musical theater touring circuit and the Vegas strip – in 1982 he was proclaimed Vegas Entertainer of the Year – and his nightclub act was often syncopated by the clatter of hotel room keys landing on stage. Even The New York Daily News was smitten, anointing Goulet as “just the man to help stamp out rock ’n’ roll.”

But the power of rock ‘n’ roll proved too awesome to subdue, even for Bobby G; his velvety voice, suave demeanor and trademark mustache eventually made him an easy target for cooler-than-thou hippies like Matt Groening and Will Ferrell. 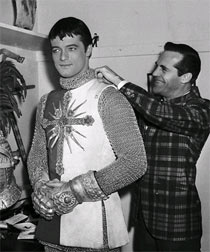 Taking the satire in stride, Goulet was able to beat the bums at their own game by shrewdly transitioning to self-parody in commercials for ESPN and Emerald Nuts. His later career also included gigs singing the songs for Wheezy the Penguin in Toy Story 2 and – at age 71 – jumping into the lead role in a revival of La Cage aux Folles. All in all not a bad career for the son of a textile-mill worker.

The Times has an anecdote-rich obituary, as does Playbill. The LA Times mentions how "Judy Garland called him a living 8X10 glossy and Truman Capote described him as the 'poinsettia of botany.'" But no memorial for Robert Goulet will be complete without Red Ships of Spain, the hilarious SNL tribute to the man who had the good sense to say, “If you can't laugh at yourself, you're a fool.”

Lower photograph of Goulet being helped by an aide for his role in Camelot, taken in May 1961, by AP