Local One, the Broadway stagehands’ union, has never struck in its 121-year history. Since salaries for stagehands – who handle lighting, props, sets and, yes, even Tarzan's vine – currently top off at 100K, who could blame them? But The League of American Theatres and Producers, who control 22 of 39 Broadway houses, are now wringing their hands after the union’s unanimous vote on Sunday to strike. (Last week the Nederlanders, the producers who represent nine Broadway theatres, seemed to distance themselves from the League’s stance and drift toward the union’s side.) 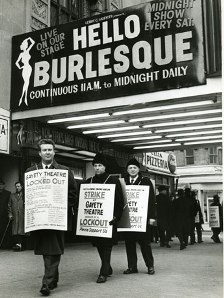 Local One has been working without a contract since July, but they're expected to bide their time a little longer so that the strike will have maximum impact during the peak holiday season. The League had initially vowed to “lockout” the stagehands starting this week, but backed off on the threat because they realized it was making them look wicked. They've offered a 16 percent pay raise over five years, but stagehands spurned the deal because it includes a reduction in jobs.

Producers claim they’re just trying to eliminate onerous union rules that require a set number of stagehands to be on the clock even if they’re twiddling their thumbs – a practice called “non-productive hiring" - and released a statement today saying, "The 'featherbedding' practices of the past are simply no longer acceptable. Our position is clear: no work, no pay." Bruce Cohen, Local One's spokesman, announced that a strike this week was highly unlikely: “We will not blindside the theatergoing public.” (That’s what Legally Blonde is for.)

And if there is a strike, tickets will almost certainly be refunded, leaving tourists with a wad of extra cash to support some of the great local Times Square eateries like Applebee's and Olive Garden. Also, NY1 reports that six Broadway shows would continue despite a strike: Young Frankenstein, The Ritz, Mary Poppins, Pygmalion, Mauritius, and The 25th Annual Putnam County Spelling Bee. Stay tuned to Playgoer who has been following the story closely.