Broadway Hopes for Grease Lightning in a Bottle 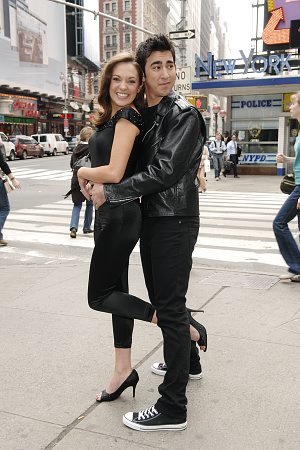 Earlier this year reality television and Broadway collided in the form of "Grease: You're The One That I Want". The show aired on NBC and documented a trip down memory lane with a troupe of wannabe Sandys and Dannys all vying for the coveted roles. By the end, two were left standing, and tonight they make their debut in Grease at the Brooks Atkinson Theater. And now, with Xanadu, Broadway is hosting two movie-to-stage Olivia Newton-John vehicles. Can Two of a Kind be far behind?

Max Crumm and Laura Osnes, who will play Danny Zuko and Sandy Dumbrowski, were not even born yet when the original stage version came out in 1972, or even when the movie came out in 1978. They're children of the 80s, so to get in to the mindset a crash course was in order. To prepare everyone the director "used movies. The flicks were carefully selected to boost the performers' knowledge of pop culture circa 1959, when the rock 'n' roll musical about Chicago high schoolers is set."

Check out a performance by the new Danny and Sandy here, this is one that helped them get to the big stage tonight, and here's a NY1 interview with the two after they won their roles. We wonder if Osnes will have blonde hair on stage tonight; she was the one of the only brunettes to try out for the role.

The last time Grease was on Broadway was in 1994-1998 (with Rosie O'Donnell playing the role of Rizzo), a relatively short time ago for a revival to be happening, but who doesn't love a little "greased lightnin'"?! Tonight is the first night of previews, opening night is August 19th.