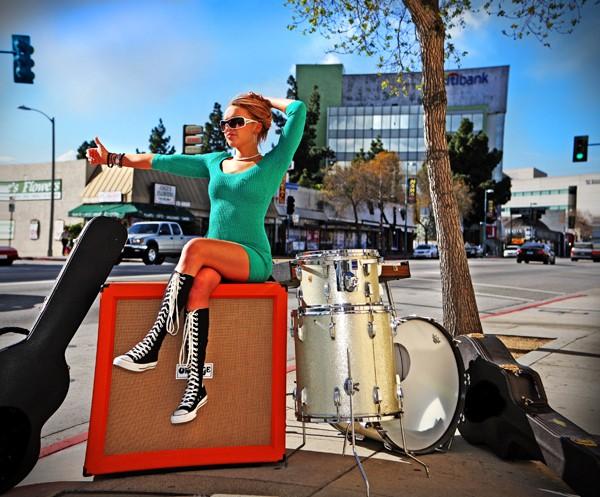 Brianna Taylor entered MTV's Real World Hollywood house as an unknown, but is using the show to catapult her music career. Her debut album just came out earlier this month, and tonight she plays at the Canal Room with American Idol's Blake Lewis. Earlier this week she told us about her music, the reality spotlight, and how the new Brooklyn cast may act around town.

Being from Philly, have you played many shows in NYC? I haven't played too many shows up in NY. I'm playing the Canal Room with Blake Lewis soon. I'm so excited!

What's your favorite venue to perform at and see music here? Well I'll know I made it when I get to play Madison Square Garden! I hope that happens! I haven't actually seen too many shows. The only concert I've ever seen is Kelly Clarkson and that was in Philly.

The Real World will be filming in Brooklyn soon, what can locals expect from the cast and crew? The cast shouldn't be trouble makers, but I doubt they'll be willing to back down from any conflict! People on the street have a tendency to scream out things to the cast and crew simply because of jealousy. It sucks, but it's even worse when the cast fights back. We're told to just ignore it by the crew, but that never happens.

Any tips for the new cast? Be yourself. Crying is BEING REAL!! Haha. Be smart and don't indulge yourself with alcohol. Go out! Get to know your surroundings. Meet people. Broaden your career.

Did the show help out your music career? Definitely. My album just came out on I tunes June 3rd. I have received a lot of positive feedback, so I know I'm doing something right!

Your debut EP just came out earlier this month, what kind of reactions have you received thus far? A lot of people like it from a variety of musical backgrounds and that's what I has hoping for!

What are your music plans now, will you be touring? I'm hoping to tour, but I'm not sure exactly what will be happening. I'm taking it one day at a time! And enjoying every minute of it.

Who are some artists you are influenced by? I grew up on Jazz and gospel, so naturally I like Lena Horne, Sarah Vaughn, Anita Baker and Natalie Cole. But I also get down with hip hop, house music, rock and metal. I like Paramore, Taking Back Sunday, System of a Down, The Deftones, Christina Aguilera...I could go on and on!

What's your current soundtrack? Honestly I haven't really had a chance to listen to music. I guess my album! It's playing over and over in my head!

Please share your strangest "only in New York" story. My friend and I got into a cab and it smelled HORRIBLE!!! The driver had just farted before we got in!

Which New Yorker do you most admire? Hahaha, I don't really know! I'm a huge Yankees fan though!

#Brinna Taylor
#interview
#mtv
#musician
#the real world
Do you know the scoop? Send us a Tip