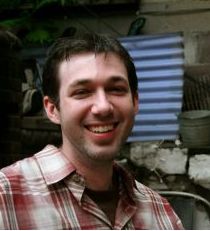 Recently Brian Greene won a daytime Emmy for his writing work on Cash Cab. The show follows unsuspecting folks hopping into a cab, only to find themselves taking a pop quiz and standing a chance to win some cash. Greene recently told us about the show, his various other writing gigs, and his encounter with Michael Richards. And in case you were wondering, the cash cab will be roaming the streets again starting this fall.

You recently won an Emmy for Cash Cab. What was your main job on the show? I was a Question Producer, which is a fancy term for writer. Each writer was responsible for coming up with 25 questions a day, which is harder than it sounds. Over the three cycles I worked on Cash Cab, I wrote about 2,300 questions... second-most of all time! But I'm the only person who actually cares about that stat.

Are there any contestants that stand out throughout the season you worked on? I didn't get to deal with contestants that often, because the writers were cooped up in the office all day. I do remember watching a show with this one guy who was in the cab with his friend… typical post-grad fratboy investment banker types. Every time he got a question right, he would celebrate by snapping his right hand toward the camera. Every single time. So annoying. It really bothered me that he ended up winning money.

Has anyone ever turned down being on the show when the Cash Cab picked them up? Yeah, there are people that don't want to be on camera, or are in too big a rush to deal with the paperwork. But most people are really excited to do it.

What are you working on now? I'm a production writer for Fuse. We just finished taping 20 episodes of a new dating show called You Rock, Let's Roll. It's similar to The Dating Game, but setting up music lovers with musicians. I also do a lot of writing for VH1 Classic, Concert TV, and a bunch of random websites.

Have you ever worked on a reality show? What do you think is in store for Brooklyn with The Real World moving in? I've never worked directly for a reality show, but I do go to all of the Real World Reunion wrap parties, so I'm friendly with a bunch of former castmates. Most of them aren't so bad. Are people really surprised that RW is coming to Brooklyn? I feel like both the show and the borough have been building towards this for a while.

Which New Yorker do you most admire? I'm gonna go with David Bowie. He's one of my favorite musicians of all time, and even 40 years into his career, he manages to stay ahead of the curve. And not just with music… fashion, culture, acting, business. How lame will it sound to say I think he's the coolest guy on the planet? Pretty lame, but it's what I think.

Given the opportunity, how would you change New York? Besides making it cheaper and less crowded? In an ideal world, I would love for subway stations to be air-conditioned. There is nothing worse than waiting for a train on a sweltering platform, sweating like crazy, and then getting hit by an additional whoosh of hot air when the train finally does arrive. It's brutal, and makes me hate summers in NYC.

Under what circumstance have you thought about leaving New York? A lot of my entertainment-industry friends have bolted for LA, and they're always trying to get me to follow them. But I'm just not an LA person. If I had a guaranteed awesome job waiting for me, like writing for South Park, then I would move. But I would never move there in the hopes of finding a job. And I would consider moving somewhere abroad, like Scotland or Prague or some other city that has an old-timey feel, if there were good writing opportunities. But since there aren't, I'm here for the foreseeable future.

Do you have a favorite New York celebrity sighting or encounter? I used to meet great celebrities all the time when I worked at MTV… Axl Rose, Vince Vaughn, and Hulk Hogan were all highlights. But as for random sightings, my favorite happened five months ago, when I was walking around the UWS. I was crossing 80th St. and saw Michael Richards and a female companion walking past me. As I reached the sidewalk, a woman who was walking her dog must have seen me do a double-take, because she asked me "Is that the racist?" When I said yes, she screamed out after him, at the top of her lungs, "FUCKING ASSHOLE!" He didn't turn around, but I know he heard her. I love that New Yorkers are so willing to share their feelings… and to hold grudges.

What's your current soundtrack to the city? I just downloaded Girl Talk's Feed the Animals (for free… I know, I know), and it's really incredible. I'm not even that big a fan of mash-ups, but this is 50 minutes of just amazing music.

Best cheap eat in the city. It's clichéd, but Corner Bistro is still great for cheap burgers and beer. But my favorite food deal is the Fondant Au Chocolate at Beard Papa's (I go to the one on 76th & Broadway, but I'm pretty sure there are others). It's basically a molten chocolate cake, and it's less than $2. So addictive.

Best venue to see music. Radio City has the best acoustics in the city, but it's so expensive and big. For smaller shows, I like Rockwood Music Hall, Bowery Ballroom, and Canal Room.

#Brian Greene
#cash cab
#emmy
#interview
#writer
Do you know the scoop? Send us a Tip