Breeder Entitlement, Or How I Was Bullied By A Senior Citizen On The M72 Bus

I try to do the right thing and stay on the sidelines when it comes to mass transit etiquette. I give my seat to senior citizens, pregnant women, children or parents/caregivers with children on the subway. I do not put my bags on other seats. But a recent altercation on a city bus made me confront whether I am actually a really horrible person.

On Sunday afternoon, my four-year-old daughter and I waited for the M72 bus to take us from the Upper West Side to the Upper East Side. The bus was a little late (at least according to the printed schedule) and it already had at least eight people when we boarded, which was surprising because we live near the beginning of the route. At first, my daughter and I sat down in the first two-seater row, facing the front. But then I got up and told her that we'd sit further back, since those seats were "Priority seating."

"Seats for someone older or someone who might have trouble getting on the bus. It makes it easier for them," I explained as we settled into the fourth row, with my daughter taking the window seat. We were headed to Second Avenue, and since I have an annoying back condition, I really wanted a seat for the not-short journey.

By the time the bus made it to Columbus and West 72nd Street, it was PACKED. There were even some people standing, so when others started to board the bus, there weren't any seats.

A senior citizen—maybe in her early 60s, and not seemingly infirm (though I can't account for internal pain/issues)—walked down the aisle, ignoring the adults in their 30s or 40s sitting in the priority seating row. Perhaps she didn't see my daughter at first, but when she did, she audibly groaned. Then she turned, muttering something along the lines of, "I can't believe people let their children sit on the bus." 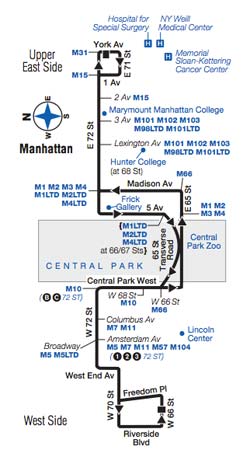 She did not speak to me, so I decided to ignore her. The woman sitting in front of me asked the older woman, "Would you like my seat?" and the older woman declined—but then proceeded to grumble some more about how she deserved a seat and my daughter didn't. So I said, "Excuse me, do you have something to say to me directly? Instead of talking about this passive aggressively?"

"Yes," the senior citizen said. "Your two-year-old shouldn't have a seat."

"What are you talking about? She's four!" I said.

The (older) woman sitting in front of my daughter laughed-harrumphed and started a conversation with a young woman in front of her—probably bonding over how I'm an entitled breeder. But, seriously, my daughter grew two inches in the past few months and she is not light.

Another (older) woman sitting behind me said urgently, "I don't think she's asking passive aggressively! She wants a seat."

But, I thought, she didn't accept the seat from the other lady! I looked at the senior citizen, and said, "Are you asking for my seat? Is that what you want?"

I picked up my daughter and put her on my lap as I scooted over by the window. We were both wearing coats (it was windy on Sunday) and now my daughter's head was two inches from the handle on the preceding bus seat, so I put my hand on the handle, in case the bus braked quickly and her head went forward. The senior citizen said, "I think you could show your daughter that you respect me by giving up a seat."

"But what about the people up in priority seating? Why didn't you ask them for their seats?" I asked as my daughter and I were packed in like sardines (if we didn't have a row in front of us, I would not be writing, ugh, 1,000 words on this).

This flummoxed the senior citizen. She sighed and finally said, "I believe I deserve respect AND priority."

By this time, we were at Central Park West and West 65th Street, about to turn into Central Park. By Fifth Avenue, my daughter said, "I'm sweaty!" so I took her out of her coat. I was sweating too, but kept my jacket on, as I fumed about the whole thing. The bus made its way east: Fifth Avenue; multiple stops along Madison Avenue; then, turning right onto 72nd, at Madison and 72nd Street; Park Avenue; Lexington Avenue; and Third Avenue.

The senior citizen got out of her seat next. Of course, I thought, we're both getting off at Second Avenue. As I stood up with my daughter, another disembarking passenger, a middle-aged woman, said to me, "You were right—there were three people in priority who should have given up their seats!"

I asked the MTA if it has "any guidelines about whether parents/caregivers, when accompanying children, should give up their seats for others" on buses and outlined my situation. Spokesman Kevin Ortiz said, "The language in our rules of Conduct [also applies to buses":

No person shall refuse or fail to relinquish a seat on a conveyance which has been designated as “PRIORITY SEATING,” “WHEELCHAIR PRIORITY SEATING” or words of similar import, if requested to do so by or on behalf of a person with a disability, or occupying any location on a conveyance designated for use by persons using wheelchairs if such location is required to accommodate a person using a wheelchair. Further, passengers aboard buses equipped with wheelchair lift devices shall not conduct themselves in a manner which will impede the operation of such lifts, impede the securing of wheelchairs in the tie-down devices located on such buses or impede the exit of passengers using wheelchairs.

Ortiz added, "There are no guidelines outside of designated seating."

Native New Yorker Jake Dobkin weighs in: "On a bus, the NYC order of precedence is: Disabled old person, Disabled person, Very pregnant woman, Child, Regular old person, Not very pregnant woman, Regular adults." And he says that I should have given up my seat. But what about the people in priority seating who ignored that they were taking up priority seating when they didn't need it? And what about the fact that this senior citizen refused someone else's offer of a seat? Why was she targeting me?

It's another one for the timeless debate about whether children count as actual people on mass transit. But the way I look at it, the lesson is either don't be such a motherfucking grouch or don't have any goddamn children.