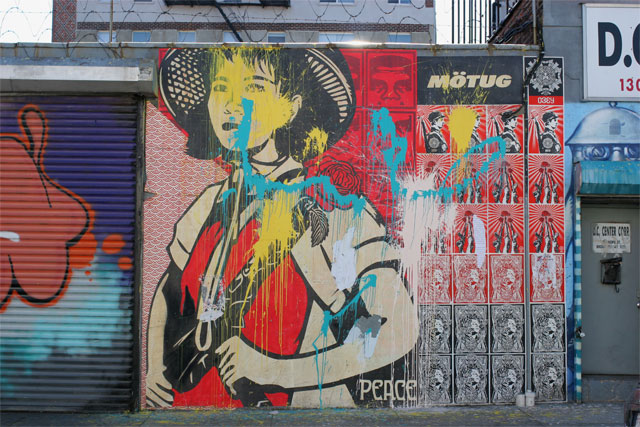 At around 11pm we got a text message from a friend at the Shepard Fairey opening in DUMBO, saying that the "Splasher got caught at the show tonight". So far the information we're hearing is that two guys attempted to set off a stink bomb at the show, but were stopped by security. It remains to be seen if the stink-bombers are the same guys who set off a stink bomb at the Faile show last week (and then called 911 reporting a gas leak, which got the show shut down), or if they were indeed the ones splashing streetart pieces all over town a few months back.

Wooster Collective was also at the scene, and has some details and a possible picture of one of the suspects:

Two young guys entered Shepard Fairey's opening night party at 81 Front Street in Dumbo with a backpack. Moments later they were seen attempting to light a homemade stink and smoke bomb that was hidden in a coffee can. As they were setting it off, two guys nearby saw what was happening and managed to stop the guys from igniting it before it went off. Seeing the scuffle, the security guys hired for the evening caught one of the two guys (shown above) while the other was able to get away. 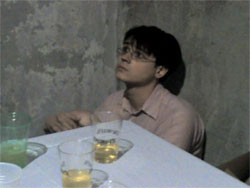 So as we write this the police are now detaining the guy as they figure out what, if any, charges to file.

So why might this be connected to the Splasher?

For the last few weeks speculation has been circulating amongst the art community here that is was the Splasher who lit off a similar stink and smoke bomb at the Faile show a few weeks back in Nolita. Going beyond it just being a practical joke, the guy who lit the smoke bomb then called the police informing them that there was a gas leak in the building. Minutes later fire engines arrived and the show was cleared out.

One thing seems clear - there are two motivations that have been driving the Splasher. Attention and a jealous desire to sabotage and ruin the work of well known artists who have gained a certain amount of notoriety. It then makes sense that after gaining a ton of press over the last few weeks, that the Splasher would try to take things to another level by not only ruining the artwork on the streets of people like Faile and Shepard, but by getting even more attention for ruining their gallery shows as well. Since it would be all too obvious to walk into an art show and throw paint on the wall, why not then attempt to close down the show by causing a panic?

We'll add detail tomorrow, once we find out what the hell is going on-- if you were at the show, tell us what happened in the comments. Stay tuned.

UPDATE: some questions we'll need answered before we'll believe the identification:
1. Is the kid in the photo the mysterious "Zac" referenced in the NY Magazine piece?
2. Are either of the suspects known to anyone in the streetart scene?
3. Were either of them seen at the Faile show last week?

UPDATE: here's a picture of Shepard at the show-- if you missed the opening, we've put pix of all the pieces up on Streetsy. 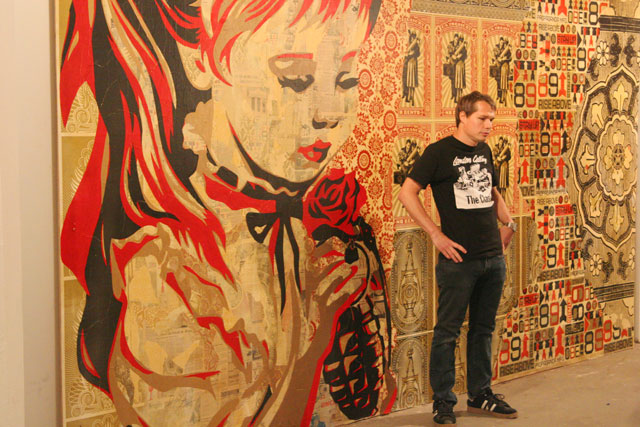 UPDATE: a few comments of note-- the first is from our friend who was at the show:

eyewitnesses say that he was the same guy as at faile withthe stinkbombs and the same guy as at the bma. the guy ny mag identified as swoon's old assistant. judith supine has an eye witness account of the details as does wooster apparently.

Here's another that sums up a lot of the email we're getting:

I was at the opening last night, and while I can't say whether or not those two people were collectively 'The Splasher', I can say what they were doing was extremely dangerous. The show was absolutely packed (I was told there were 3500 people on the guest list)., and it could have really turned into a stampede situation where people got hurt had they succeded.

And we spoke to Marc at Wooster Collective-- he said the photo of the alleged Stinkbomber was sent in by someone at the show who feels that there is a big difference between splashing some work on the streets and setting off a smokebomb in a crowded gallery. The reason Marc put up the picture is to encourage people to come forward and identify these kids, and thereby discourage them from pulling these stunts before they cause a situation where people get hurt.

Still no word on whether these guys are The Splasher, however.

UPDATE: Sam scanned the front and back of the ObeyBucks that Shepard has been leaving around town.

UPDATE: Juliana Bunim at the Brooklyn Paper is reporting that the captured Splasher suspect has been charged with reckless endangerment and attempted arson, which carries up to 15 years in prison as a penalty. Apparently the DJ was responsible for detaining the kid before he lit his smoke bomb:

DJ scratches ‘bomber’: Keen-eyed spinner may have caught ‘Splasher’ By Juliana Bunim for The Brooklyn Paper

A quick-acting disc jockey saved the day — and quite possibly helped catch the art world’s elusive Splasher — at Thursday night’s glitzy opening to graffiti legend Shepard Fairey’s DUMBO installation after one of the guests attempted to light a flammable device amidst a crowd of 500 street-art lovers.

DJ 10 Fingers first spotted the would-be “art critic” as he prepared to ignite what cops called a “flammable device” towards the end of the opening of Fairey’s “E Pluribus Venom” show at 81 Front St. at around 11 pm. A witness said the quick-acting disc jockey subdued the man just in time.

A half-hour later, the bomb squad rushed to the scene to “investigate some sort of flammable device,” and arrested the alleged would-be bomber, said an NYPD spokesperson.

The suspect, whom police said was from Bushwick, was charged with reckless endangerment and attempted arson, which carries a maximum of 15 years in jail.

Security “immediately swept the entire room to make sure there weren’t more devices,” said event coordinator Michael Petrovich. “We went into shut-down mode, trying to get everyone out in an orderly fashion. Luckily, not too many people realized what was going on.”

Petrovich said there was a second suspect who fled the scene, but police would not confirm that claim. The incident has left many in the art world wondering, could this be
the famous Splasher — a shadowy figure who has made headlines (in some circles) by vandalizing outdoors works by established graffiti artists.

Nobody knows his (or her) identity, but at a street artist gallery opening earlier this month in Manhattan, a critic set off a “stink bomb” — and many believe it was the Splasher.

Fairey wouldn’t talk about the Thursday night incident, but in an earlier interview with The Brooklyn Paper, he made it clear that he disapproves of the Splasher’s approach: “If you want to critique the absorption of the street art world into the bourgeois system, then say it in a way that’s not just totally destructive and really meaningless. The Splasher is just destroying and not making any contribution. And he’s selective about splashing only people who do some of the best work because they’re the ones who end up succeeding commercially.” (For the full interview, see here).

As of Friday, however, it was unclear whether the attempted bombing of Fairey’s opening was indeed the work of the Splasher.

But then again, how would anyone know?

“This is not a situation where someone is going to come out and say they’re the Splasher,” Petrovich said. “These individuals are either stupid or they just have some sort of jealousy.”

Anyone heard anything else?