You may know Brad Walsh for his music, or his photography, or his jewelry design skills, or even as the super supportive boyfriend of designer Christian Siriano (as seen on Bravo's "Having a Moment" earlier this week). And by the time you are done reading this interview there is a chance he'll have conquered some other creative corner of the world (keep up on Twitter). Walsh's remix album, titled "Unhitched, Restitched" is set to drop this summer, but for now, get to know the man behind the mixing boards, the camera, and the gorgeous rings.

Photographer, musician, jewelry designer... is there anything else? I paint some. Not well. Hmm... though I do cook! Slap a dress on me and call me Katie Lee Joel and I could host Top Chef.

Are there any other worlds you'd like to conquer? This is so cliche but the two other things I would love to get into are directing/producing video, or designing menswear. I sorta started in on it by directing my own music video for my song "Human Nature." And I have a lot of say when Christian designs clothes for me to wear to events. But they both excite me so I would love to do more!

Which talent do you most naturally gravitate towards; do you consider yourself a musician above anything else? Yeah, I do. Music is what I'm always thinking about. Photography has always been just a hobby for me, but it's so much quicker and easier that I've done quite a lot of it. I think, though, that creative people are just creative, so it's not all that odd to me when you have these megacreators like Beyonce or Gwen Stefani or, I don't know, maybe Jamie Foxx, who do music and film and art and fashion all very well. I can't actually think of any shining examples right now. Jennifer Lopez keeps popping into my head. But... you know. Not quite right. 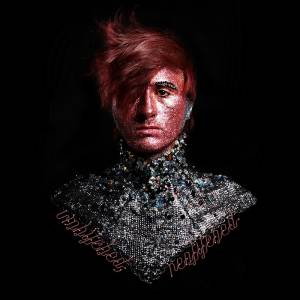 Unhitched, Restitched cover art
What are you working on right this second? I'm in the midst of putting together my two next albums. In June I'm releasing a remix album with some really amazing stuff on it. My own songs, remixed by other people, and some reinterpreted by other artists. I can't believe the people I'm collaborating with, actually, it's really exciting for me. And I'm also writing and recording my next new album, which I think will probably be done in the fall.

Who worked on your upcoming remix LP? I'm kind of superstitious so I don't wanna release any real details 'til I have the mastered copies in my hands. But I'm very lucky to have the people working on my stuff that I have!

What musicians are you currently listening to? I've had a lot of classical on lately. Not that I'm a connosieur... mostly iconic stuff that everyone knows. Bizet and Vivaldi mostly. But I'm not feeling a lot of newer music. Sade and Gorillaz new stuff is good. When I'm making music, though, I listen to what I'm doing and not much else.

In an interview you did last year you said you were becoming more and more terrified of leaving the house, and you don't take the subway anymore—is that more under control now? When's the last time you swiped a Metrocard? Oh I don't know. I still do all my stuff at home, so I don't have a lot of necessity to leave, but I get out more I guess. I take the subway, I just bought a card the other day. I have waves... it's an axiety thing. These days I'm more okay and it doesn't get to me as much to be in public. Hopefully this is a permanent upswing!

Which New Yorker do you most admire? It changes, but right now it's Julie Heffernan, the painter. Her work is just stunning. She's a living legend, to me. She's like the 21st century Brooklyn version of Jan Van Eyck.

Given the opportunity, how would you change New York? Well, I think The MTA is pretty awful. And then the city does everything in its power to make car owners want to get rid of their cars. We're the greatest city but we have the worst & dirtiest transportation! Kind of embarrassing, actually.

Under what circumstance have you thought about leaving? I can't leave now! Where would I go? Like I said, New York the best/worst. But it's still the best, so I can't imagine living anywhere else.

If you weren't living here, where would you be? Probably LA. And I would hate the world.

Best restaurant. I love the food at Bagatelle and the restaurant in the Cooper Square Hotel. And Abe & Arthur's was great. Angelina Cafe downtown (I think on 3rd and A?) was an old haunt for me and Christian when he lived in that neighborhood. Really great food at a really great price.

Best venue to hear music. I actually never go to live shows anymore. I've sat here trying to think of what to say to this and I honestly have no clue.

Any favorite Williamsburg spots (for drinking, eating, shopping, etc)? Juliette on North 5th and Bedford. Great restaurant, the staff is super nice, it's really comfortable and pretty and the food is great. For shopping I always recommend About Glamour on North 3rd between Wythe and Berry. It's just the cutest place and it's full of clothes you will never find anywhere else. I don't know where they get their stuff but it's a treasure trove.

And finally, we must know! Did Christina Hendricks have anything to say about the Cathy Horyn/Golden Globes extravaganza? Well I know she and her husband gave statements expressing their disappointment over how ridiculous it all was. But I'm sure she's moved right on... it was a stupid mistake on the part of the NYT, but ultimately, Christina is a great actress on a hit show, a fashion icon, a role model for so many people... I doubt she's losing any sleep!