Bowery Wars Brings Bad Old Days Back To The Streets 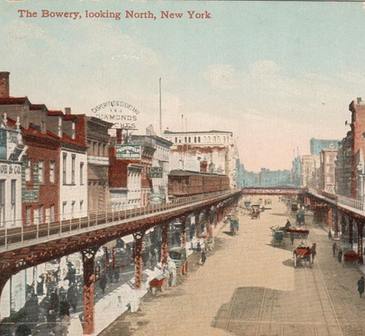 Downtown Art continues its Inheritance series with a site-specific music theater piece titled The Bowery Wars, Part 1, which will be brought to life by a company of 22 young performers in the streets of the Lower East Side starting April 30th. It's like a sequel to Gangs of New York, but with NYC's turbulent past given the live and in your face treatment! (Bonus: no Cameron Diaz.) Here's a little primer on the piece:

In 1903, Tammany Hall, which had been ousted and humiliated two years earlier, burns to retake city hall, while on the streets of the Lower East Side the ongoing rivalry for control of the Bowery between the Five Pointers and the Eastmans explodes in the worst gunfight New York had ever seen. For six hours, over 100 gangsters battled beneath the Allen Street 'el', without interference from the police. The Bowery Wars, an epic told in two parts, weaves into these historical events the story of two immigrant teens, Romeo and Juliet.

New York City's history is our shared inheritance. The Bowery Wars looks at our city a hundred years ago, when the Lower East Side was the densest place on earth, and poses questions about the will to survive in the face of hardship and violence.

Act I will begin at Lafayette and Jersey streets and end on Forsyth, and Act II will be performed in a vacant lot at 19 East 3rd Street. At the latter section, a live band will also be performing, where at the former, audiences will hear the dialogue and score on individual mp3 players synced to the live action on the streets. More information and ticket details can be found here.

#Bowery Wars
#Downtown Art
#five points
#theater
Do you know the scoop? Comment below or Send us a Tip