Bourne in the NYC 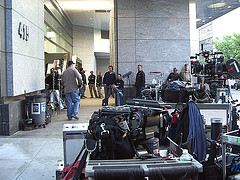 This week The Observer plays the role of that guy at the movie theater by pointing out inaccuracies in a film. This time it's a New York location that's off in the new Bourne movie - which was filming here back in February of this year. (Skip the blockquote if you don't want to know any details about the movie.)

However, nothing is as it seems in the third installment of the Bourne saga, and the date, 4/15/71, proves to be code for a crucial rendezvous point: 415 East 71st Street...

In an attempt to satiate a slightly unhealthy obsession with the new action flick, we did a little research and discovered that, alas, 415 East 71st Street is not the headquarters for Treadstone, the outfit that trained Bourne to be the ultimate spy/assassin. It is an apartment building over on First Avenue.

The building used for the scene was actually the Family Court building down at 60 Lafayette.

Apparently their first choice for this location was NYU Hospital, but you know - the patients couldn't exactly take time off from being sick. This surely isn't the only time there's been an inaccuracy like this in a movie, so what have you noticed at the theater? We'd have to say the worst so far is when Sam Raimi put Chicago's El train in the middle of Manhattan in Spider-Man 2!

Photo of 60 Lafayette with the number 415 on it during reshoots of The Bourne Ultimatum in May via Merodii's Flickr.