From the outset of Donald Trump's presidential campaign, when he claimed that Mexican "rapists" were surging into the country, immigrants in New York and across the country have struggled to deal with the fallout of his xenophobic rhetoric. Trump's efforts to clamp down on immigration and ramp up deportation have coincided with a spike in hate crimes and immigration-related arrests in New York City. Public defenders say their clients are afraid to report to courthouses, where ICE agents are popping up with increasing frequency. ICE agents themselves say they feel emboldened.

The hat costs $9.99; the shirt, emblazoned with "AGENT WALL," goes for $29.99. The costumes are displayed next to the Trump masks.

"It takes a vast amount of privilege to find humor in a uniform that represents terror and fear for millions of New Yorkers," said Steven Choi, director of the New York Immigration Coalition, in a statement to Gothamist. "We hope people will exercise better judgement and choose not to spend their money at these stores, and that universities will update their Halloween guidance to include the immigrant experience." 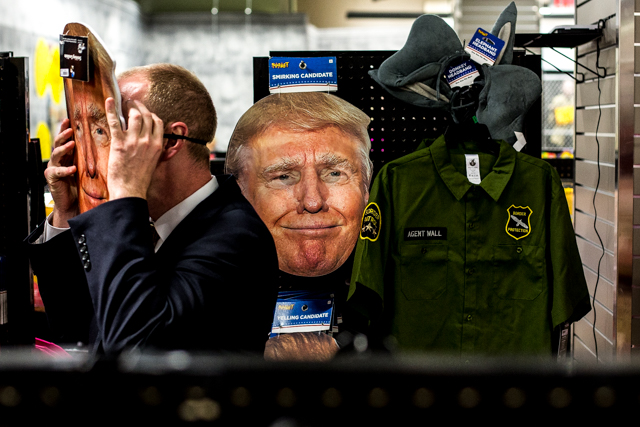 The group added that while these types of costumes have been on their radar in the past (what's more American than a Halloween costume that makes light of human suffering and/or entrenched racism, after all?) this is their first glimpse of the border patrol genre in New York City.

A spokeswoman for Spirit Halloween did not immediately comment on the border patrol costume. The company also did not confirm when the costume was introduced, or whether it is on display in all NYC Spirit Halloween locations. [See update below.] We spotted the displays at a 37th Street and 5th Avenue location alongside Trump masks, as well as a location near Broadway and 34th Street (alongside Trump and Putin masks).

On Monday afternoon, a smattering of shoppers at the 37th Street location gravitated toward the Trump masks, taking selfies and laughing.

Spirit Halloween has 11 locations in Manhattan, according to its website, as well as one in Brooklyn and two in Queens. The company's sexy take on the costume—the Border Babe—is online only and currently sold out.

"As Donald Trump and his out-of-control immigration agencies escalate their attacks on our families, the pain of our communities is no laughing matter—and certainly should not be a part of anyone’s Halloween celebrations," he said. "These products should be immediately discontinued, and the company should apologize immediately.”

[Update] Spirit Halloween gave us this statement on the costumes:

Spirit Halloween offers a full range of Halloween costumes that celebrate and appreciate all cultures, occupations and figures, both real and imaginary. With that, we playfully acknowledge topical themes - and building the wall is certainly a trending conversation in today’s political climate. We believe this costume carries similar sentiments akin to that of a police officer, military costumes, firefighter, doctor and more. As the president continues to drive the headlines and hashtags, we have costumes for everyone to join in on the fun, including: piggybacking on Mr. President, a host of masks that illustrate Trump’s many personas and a presidential BFF Putin mask. We’ve respectfully developed these costumes knowing that Halloween is a time for humor and fun, and due to the overwhelming popularity of these items last year, we think it’ll be a huge hit with our shoppers again!

#border patrol
#halloween
#original
Do you know the scoop? Comment below or Send us a Tip