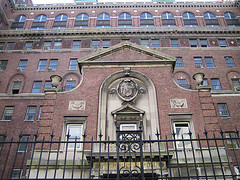 The NY Sun opens the books on Bellevue Hospital's creative output. That's right, Bellevue has been publishing literature under The Bellevue Literary Review. Perhaps it's about time the 271 year old walls began to talk.

Even though the hospital drips darkness, "no tales from the wards have yet appeared in the books." This isn't to say it isn't allowed (they state it isn't encouraged or barred), but the rules of the press seem to prohibit institutional history, health advice and individual accounts of illness. So what's fit to print?

"Its first four titles this spring included a novel interweaving themes of sickness and recovery into a 1940s family drama; a collection of editorial cartoons by an accomplished physician-artist, and an experimental nonfiction work that explored the mind-set and meaning of awkwardness. The press plans to release four more books, including another novel, this fall."

Publishing insiders diagnosed the move as "possibly unique," and perhaps a first for a medical institution to publish non-health manuscripts. Hopefully their current goals will be altered a bit so we can get more non-fiction accounts of the goings-on in the history-heavy institute. Maybe some truth-based fictional work by patients or former patients should also be allowed (we're thinking The Bellevue Jar, which Julia Stiles can later turn into a lighthearted romantic comedy for the big screen). Though The Times reported earlier this year that the hospital would like to "push away any psych-ward images."

For now, the operation is run out of an office in Bellevue's complex along the East River, and is funded by donations. Each published piece of literature is a tale of the human condition, and dosed out with an initial pressing of 3,000 copies.