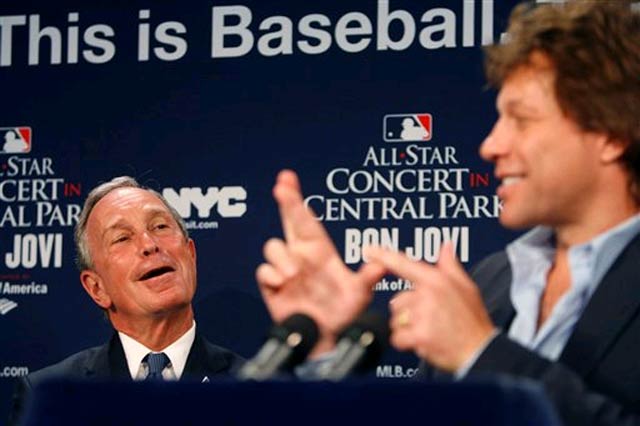 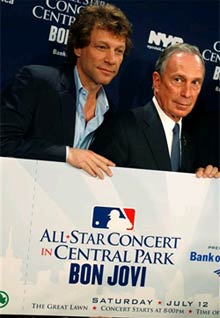 Yesterday came the announcement of a free concert that would be held on Central Park's Great Lawn this month featuring Mr. Jon Bon Jersey himself (now a Manhattanite). Today more details about the July 12th show and how to procure your golden tickets are unveiled via Bon Jovi's official website. Essentially, tickets will be made available at every major, and some minor baseball stadiums beginning July 2nd. Starting at 9 a.m. that day Bon Jovi fans will descend upon Yankee, Shea, KeySpan Park and the Staten Island Yankees stadiums...get more details here if you want to be one of them. And note that tickets will also will be available in Manhattan at DHL All-Star FanFest at the Jacob K. Javits Center on Friday, July 11th.

"All-Star Summer is set to hit New York City in a few weeks, and the lineup of festivities just added another future hall-of-famer in Bon Jovi. The free concert in Central Park is going to help make this year's All-Star Summer a celebration to remember. The 2008 All-Star Game will pay tribute to the storied history of Yankee Stadium, and Bon Jovi will help us ensure it goes out in a blaze of glory, hopefully a blaze in late October."

#All Star
#bon jovi
#central park
#concert
#great lawn
#jon bon jovi
#mlb
Do you know the scoop? Comment below or Send us a Tip
A new Gothamist is coming! We’ve moved comments over to our beta site. Click here to join the conversation and get a preview of our new website.