**HARK, HERE BE SPOILERS.** Just in time for the heat dome to settle over New York, making you never want to leave the confines of your air-conditioned apartment, Netflix has dropped Season 3 of Bojack Horseman. And while we're sure that the season has plenty of the self-destructive behavior and animal sight gags we've come to love, let's take some time to appreciate the first episode, in which Bojack finally visits New York.

If you'll recall last season, Bojack moving to New York to do some serious theater acting was a big dream of his, one that was derailed when he pissed off the hack director of the Secretariat biopic in which he was starring. But, in Season 3's premiere episode, "Start Spreading the News," Bojack finally made it here, if just for a Secretariat press junket. The city is hilariously misidentified by Bojack's roommate/possibly only friend Todd, who bursts out of Bojack's suitcase and tries to identify where they are by sniffing the air:

"Bagels? Pizza? Hipsters? Urine? Am I in Minneapolis?"

Bojack takes in some weird experimental theater (The Tragedy of Greg Kinglear which should be made into a real off-Broadway play immediately), and in true Bojack fashion, there's a whole bunch of sight gags specific to the episode's setting. There's the generically-named A Manhattan Diner, where Bojack meets an old friend for coffee and which advertises a "Greenwhich Eggs and Ham Sandwich" and "Eggs Upper Easty Breakfast" on a street-facing whiteboard: 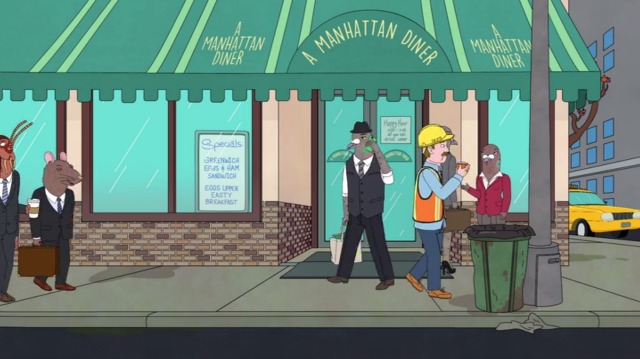 Inside the diner, the corkboard next to Bojack and his friend is covered in New York City references: 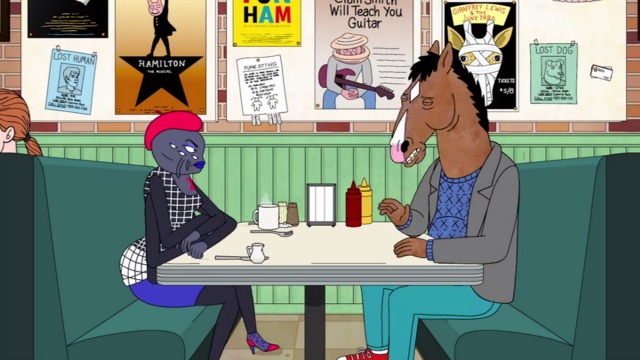 
And of course the walls themselves are covered in pictures of both human and animal celebrities who've presumably stopped in at A Manhattan Diner. Will this turn out to be the best episode of Bojack this season? Well, episode 2 manages to have a lot of hilariously specific jokes about 2007, but our New York Supremacy Complex says that yes, this is obviously the best one.