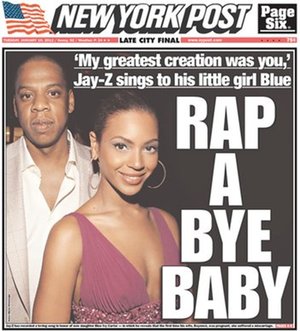 Blue Ivy Carter has left the building. Specifically, baby Blue has departed her private digs at Lenox Hill Hospital to go live with her parents, Jay-Z and Beyoncé, in Tribeca. The little diva, less than a week old, left the hospital in a luxury Mercedes van. So, now what?

She's probably enjoying her new digs—reportedly she has a nearly $20,000 crib that looks like a carriage in a fairytale. And according to the NY Post, she's also got a "solid-gold, handmade horse from Japanese jeweler Ginza Tanaka that Jay-Z bought for $600,000." The kind of person to buy a newborn a solid gold horse for $600,000 certainly wouldn't be the kind of person to hand over some cash for a birthing room hand built around his specifications, right?

That's right, Baby Blue may be at home, but BabyGate continues! According to the Daily News, the head of Lenox Hill Hospital has ordered an internal investigation after non-famous new parents complained they weren't allowed to see their newborns because the Carter family's security detail stopped them. Executive Director Frank Danza is now talking to the parents who felt they were inconvenienced by the famous couple's special treatment (which the hospital has been denying even happened). He adds that the couple did not pay $1.3 million to rent out an entire floor, nor did they pay for renovations to the suites, claming instead that "several newly built executive suites" were just completed before they arrived, so the couple got lucky. Right, so the average couple now needs bullet-proofing and tinted windows in their hospital room?