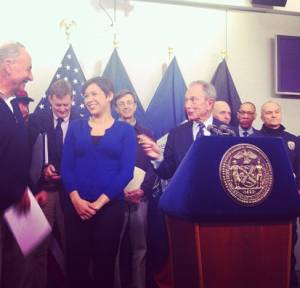 At this morning's presser. (Jen Carlson/Gothamist)

The best part of Mayor Bloomberg's many, many press conferences over the last couple days of FRANKENSTORM intensity wasn't his Spanish recaps or Ray Kelly's turtleneck ensembles—it was Lydia Callis, the American Sign Language translator who genuinely kept us engaged while Bloomberg did his best to imitate a kindly, comfort-sweater wearing uncle.

As Boing Boing put it, she was "like a human emoticon for one of the nation's most expressionless mayors." And now, days after she gestured her way into our hearts, she has gotten the adoring Tumblr that she deserves, which you can check out and contribute to here.

For what it's worth, our own Jen Carlson got to meet her briefly this morning, and reports that she doesn't seem too jazzed up about her newfound fame. When asked about what people were referring to her on the internet as, she said, "Yeah they gave me a name... I don't know I have to look, 'hot sign language' something..." [walks away shuts door behind her!].

#asl interpreter
#bloomberg
#lydia callis
#mayor bloomberg
#sign language
#tumblr
Do you know the scoop? Comment below or Send us a Tip