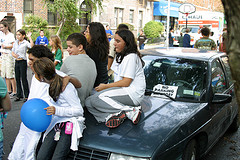 With Labor Day weekend well under way, the season of block parties is about to come to an end. The NY Times has a story today on 4 of the 225 block parties that took place in the city last weekend (overall most take place in Brooklyn).

That high number is courtesy of the mayor’s street activity permitting office. To get approval one must fill out an “application for street activity permit,” pay $15 in fees, describe the party...and if sound will be amplified another permit from the NYPD, costing $45, will be needed. All in all, a pretty simple and inexpensive process.

What happens once the block is free of traffic? The four parties that the NYT's visited had a lot of similarities, and in the end it seemed each one stemmed from nostalgia -- with older folks on the block reminiscing about the block parties of their youth (of course, neither past or current ones were like Dave Chappelle's 2004 Block Party).

Each had its own centerpiece -- on 50th Street, between Fourth Avenue and Fifth Avenue, the focus was the 54-lb roasting pig. On Littlefield Avenue in Staten Island, the “Moonwalk Ride” was the getting all the attention. On Bristow Street in the Bronx the focus was on banding together and becoming a neighborhood. Finally, on Seaside Avenue the kids, food and music were all taking over -- as they should be at any good block party. Overall, they sound way better than street fairs.