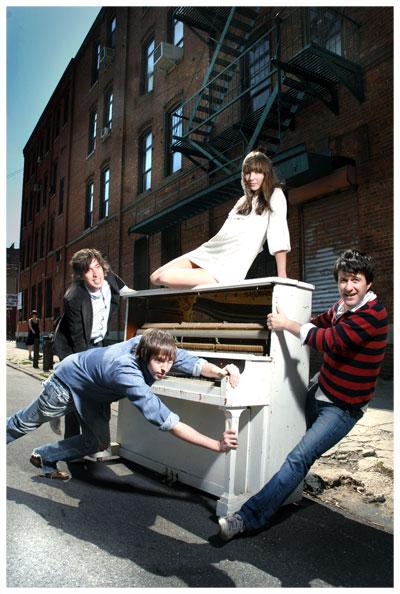 Last year Brooklyn band Bishop Allen released twelve EPs, one for each month. This year they're delivering twelve songs which make up their label-debut full length album, The Broken String (out July 24th).

The Harvard grads who formed the band, Justin Rice and Christian Rudder, also wear their acting hats from time to time. Perhaps fittingly their band has had a rotating cast of members, and currently includes drummer Cully Symington and vocalist/percussionist Darbie Nowatka along with a long list of collaborators. They'll all be on stage at the Seaport Music Festival this Friday where they play with Rock Plaza Central.

On the 20th you play the Seaport and after that it looks like you're on the road for a good amount of time, do you all have day jobs?
No, we don't. Constant touring is the perfect antidote to a day job. That and cheap living.

What do you miss most about New York when you're on the road?
When I'm about to leave New York, there's nothing I expect to miss. But when I return after being gone for a while, there's this moment of great relief, and I draw a big breath, and all of the sudden I feel lucky. Like maybe I didn't expect the city to be here still. Or maybe I expected everything to be unrecognizable. But it's always here, and it's always instantly familiar. Most of my friends live here, and while tour is busy and crowded full of people, I'm always happy to get back to my friends.

Last year you put an EP out every month, what was that experience like? And have you thought about challenging yourselves like that again?
I imagine old-timey newspaper reporters in a crowded press room squeaking by one deadline only to find there's another one staring them down. That's what it was like. We spent all day confined to our tiny, windowless studio, and we were always hustling to finish songs, but it made us write and write and write, and everything we wrote gave us new energy and enthusiasm. We would never do the exact same thing again, but we will definitely come up with more harebrained schemes and crackpot challenges. We've got to keep things interesting.

Please share your strangest "only in New York" story.
Yesterday, my neighbor and my landlord had a talk that lasted over an hour. I could hear them through the walls. Thing is, my neighbor only speaks Spanish, and my landlord only speaks Polish. I've never been able to get very far in a conversation with either one of them. Usually, no matter what I try to get across, all I can get out of my landlord is "my son, tomorrow, he fix," or "everything okay," and even then, I'm never sure whether those phrases are questions or statements. Ditto with the neighbor. What were they talking about? And how were they talking about whatever they were talking about for an hour? I'm still puzzled.

Which New Yorker do you most admire?
A.J. Liebling was an amazing writer and a New York(er) institution. He was there there for D-Day. He was at every boxing match. He cut an imposing profile with his suspenders and his pocket hankie. And he could bet a horse. I read that when he wanted to land a job at the New York World, he hired a guy to stand outside the offices all day wearing a sandwich board with big black letters: "Hire Joe Liebling." He was also a damn fine eater, and reading Between Meals changes the way a person looks at food forever.

Given the opportunity, how would you change New York?
Everything would be free. Like communism.

Under what circumstance have you thought about leaving New York?
Every month when rent is due, it comes as a nasty surprise. Really? Didn't I just do this last month? And what's all this money for, anyway? Also: don't ever get arrested in New York. Even if it's a minor infraction, you'll get thrown in Central Booking, which is always four hundred percent more crowded than it's designed to be. You'll be lost in "the system" waiting for arraignment, drinking milk, and eating bologna sandwiches for forty hours, which is the equivalent of an entire work week.

Can you please recommend a good weekend hang-out that isn't unbearably mobbed?
I try not to go out on weekends because everywhere is mobbed. If I do, I try to stay in Brooklyn, because the line to the bar is only three deep to Manhattan's five. I do have some places that stay nice and dead, and these I guard like the combination of my bank account and pin number.

Do you have a favorite New York celebrity sighting or encounter?
I did menial work on a film shoot once on a soundstage in the Meatpacking District. We were interviewing famous people, and Donald Trump and Mikhael Gorbachev showed up at the same time, bodyguards in tow. They were both astonished, and spent several minutes attempting to defer to one another: "You go first. Please." "No, I insist: you first." Gorbachev went first. His bodyguard stood right behind him the entire interview.

What's your current soundtrack to the city?
Walking around aimlessly in New York: that's when I get most of my ideas for songs. When there's nothing playing, it's natural to fill the void with tunes for your feet. So I hardly ever listen to music in the city. But sometimes, I'll sing that song by the Jam: "In the city, there's a thousand things I wanna say to you."

What's the best subway line?
The JMZ. It's got the best name.

Yankees or Mets?
The Mets. Because I'm a Red Sox fan. And because the Yankees don't even seem fair.

#Bishop Allen
#brooklyn
#Christian Rudder
#Cully Symington
#friends
#get out
#harvard
#interview
#jobs
#Justin Rice
#Music
#music festival
#new york
#people
#rice
#rock
#Rock Plaza Central
#seaport music festival
#the city
#When I
Do you know the scoop? Send us a Tip
A new Gothamist is coming! We’ve moved comments over to our beta site. Click here to join the conversation and get a preview of our new website.