Billy Joel Performs as the Mets are Movin' Out 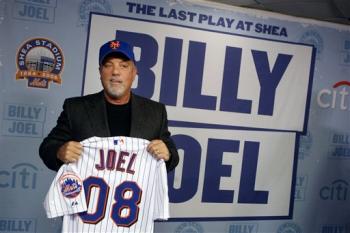 In 1965 The Beatles performed at Shea Stadium (video), beginning a tradition of rock on the ball field. Sadly, they won't be around to bookend the life of the stadium, which opened its doors on April 17th, 1964 and gets torn down after the 2008 season.

Helping them close up shop are Billy Joel and his piano. On July 16th Joel will make "The Last Play at Shea," and later in the year The Mets will move over to their new, corporately-named stadium, Citi Field.

Joel has never played the stadium before, and said of his future performance there, "I'm a New York fan, and before this venue is gone, to have the opportunity to play here is really something else. This is really an honor. This is something I never dreamed of back in the day." He also hinted at paying tribute to The Beatles, but made no mention of honoring others who took the field before him. That list includes: The Rolling Stones, The Who, The Police, Simon & Garfunkel, Elton John, Eric Clapton, Bruce Springsteen and the E Street Band, Janis Joplin and Jimi Hendrix and many more. Tickets for Joel's show go on sale February 16th and can be purchased here.

Photo via the AP