Bill Murray continues his awesome pattern of appearing in places where you least expect it and doing things the way you always hoped Bill Murray would do them in his off-camera life. Having already crashed private karaoke parties and given random people bear hugs no one will ever believe, the actor crashed a kickball game on Roosevelt Island on Sunday. 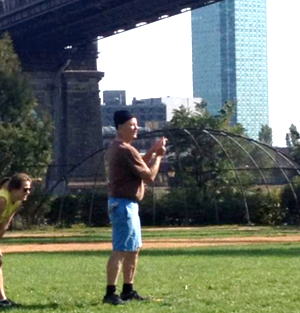 It seems Murray was on an outing to the island with his younger sons when he came across some twenty-somethings playing kickball at Roosevelt Island's Firefighter Field. One of the players, Margaret Rainka, tells College Humor, "It was my turn to kick and the ref said, 'do you mind if my friend Bill kicks?' I was thinking, 'Yes I mind, it is my turn to kick I don't want your rando friend to take my turn.' Then I heard someone say it was Bill Murray, so I decided I would let him kick :) He was a good teammate, and got on base!" Of course he did.

Another player, Courtney Beard, elaborates that the ref "said he first began speaking to him on the Roosevelt Island tram because of a hat he was wearing…can’t remember the team and the ref didnt even know it was Bill Murray. He overheard someone behind him point this out haha and then said he should stop by the kickball fields for the games. I looked out and thought it was just some old guy, then [my teammates] informed me it was him. He was dressed kind of like a homeless guy going to play sports."

Murray played kickball for about 10 minutes, at which point we're guessing he remembered he's a grownup. [Via Roosevelt Islander]

#bill murray
#kickball
#roosevelt island
Do you know the scoop? Comment below or Send us a Tip