Bigger Isn't Always Better: How To Hack Your Bike Routine With A Brompton

Of all the "sports" out there, biking often seems like the activity with the most crossover between fitness and everyday life. Sure, you can be that guy in the head-to-toe Spandex zipping around idling traffic, but let's be real: that's not for everybody. Most bikers are regular people with regular-people problems: they have to get to work, they have to run errands, and they don't have all the interior space in the world to store big objects...like a typical bike.

So, we tried something different. Brompton, the UK-based designers and manufacturers of stylish folding bikes, challenged one of our writers to trade in her road bike for a week and take a spin on something new. Check out what she had to say below: 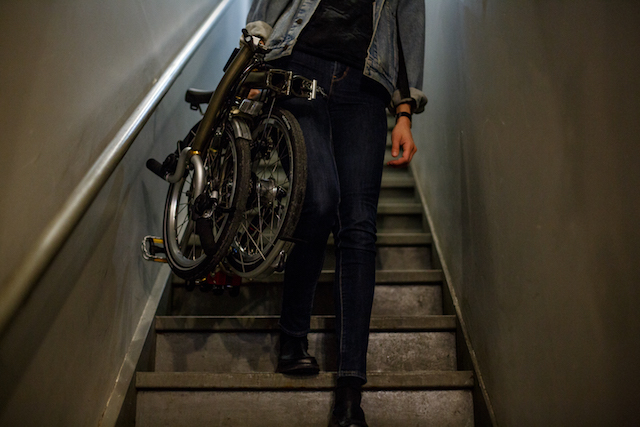 I am not a tactical learner. When an employee at the Brompton offices in Brooklyn demonstrated recently how to unfold the company's signature steel frame bicycle—once, twice, three times—my attention kept slipping: to the smooth, grey office floors, to the snowflakes falling outside. I was convinced, preemptively, that an assembly-required step to my morning commute would not stick. It had, after all, taken over a year for me to tune up my traditional bike—an early '90s six speed handed down from my mother.

So I was surprised a week later to find my hands gracefully going through the motions: sweep up the grippy handlebar; tighten the clamp to secure it in place; pull up the seat post, tighten it. Sweep the front wheel forward and out; clamp it. Finally, most satisfyingly, lift and flick the back wheel out into place. 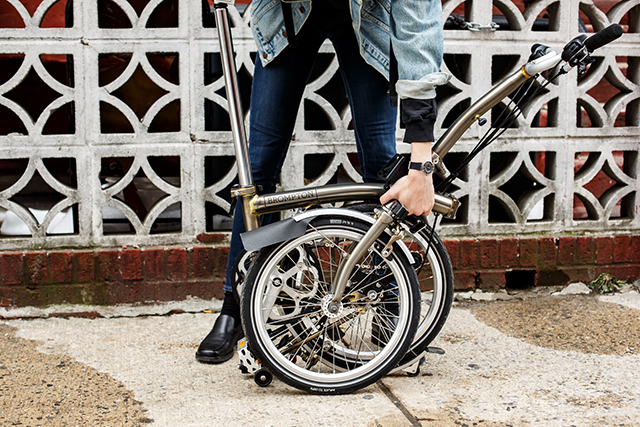 Assembling and folding the Brompton quickly became a brief (and almost ritualistic) interruption to a much smoother routine. There are no bike racks on the sidewalk outside my house, and the rusted railing is crammed with equally-rusted bikes that haven't been unlocked since the fall. Now, instead of hoisting a bike over my shoulder for the five flight trek to my apartment, I can carry the Brompton at my side, gripping the seat.

Since the wheels are tucked away, I don't have to worry about tracking mud into my apartment. My old bike leaned against the wall in my living room like a sad sculpture; the Brompton tucks into the corner of my office (more like a large walk-in closet full of discarded furniture, but you get the idea). The ride is smooth, too. My commute gets a bit hilly in one neighborhood: but it's totally doable with the six-gear Brompton, with its intuitive handlebar shifters. 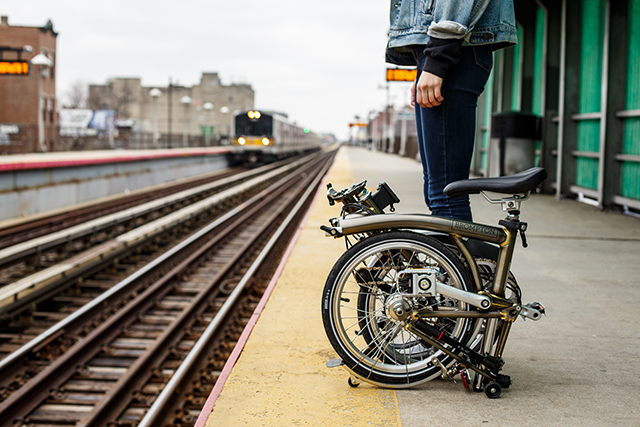 A folding bike—just under two feet tall and ten inches wide when folded—also eliminates the stress of getting caught in wintry mix—or, thinking forward a few months, when the summers get too long and too hot to get back from where you've gone. It fits in the back of a taxi, on a rush hour train, and even under a cafe table when the only option is to get inside as quickly as possible. (Brunch lines anyone?) I've taken public transit with a friend who races bikes and cringed while he tried to maneuver his frame away from the subway doors, angling for open space at the far end of the train car and trying to make himself as small as possible. The Brompton is definitely for the considerate straphangers of the world, and a great way to hack any commute—whether it be to work, to run errands, or just for a good old fashioned cruise through the park. 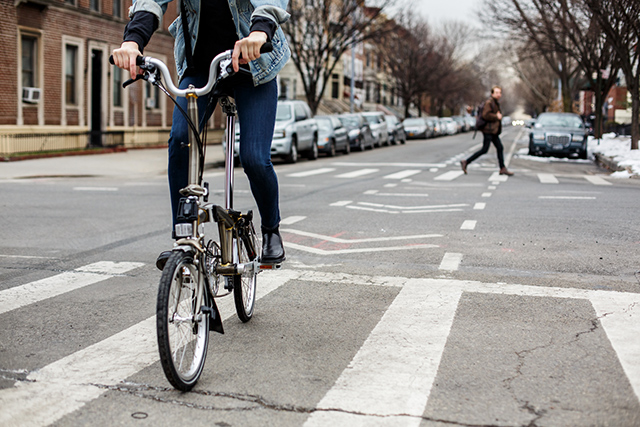 Riding the Brompton to work the other day, feeling slightly self-conscious about the low crossbar and straight handlebars (I have yet to see a cool bike delivery guy weaving through traffic on one of these, but anything is possible), I noticed a man crossing the street in front of me with a bag of recycling. He stopped, kept walking, then looked back over his shoulder. "Nice bike!" he shouted. I slammed on the brakes, surprised. "Thanks!" I shouted back.

Truth is, it's a pretty show-stopping, functional, and aesthetically pleasing bike. Ride a Brompton, and you're bound to get a lot of compliments, questions, and double-takes. You just have to nail down the habit of opening and closing the bike—and I was told that the fastest fold was just over 7 seconds. Anyone out there want to try and beat the record?

To learn more about Brompton bikes, visit their website and get riding.

This post is a sponsored collaboration between Brompton and Gothamist staff.