A new mural of famous freshman Congresswoman Alexandria Ocasio-Cortez, who represents parts of the Bronx and Queens, has gone up far from her district on the Lower East Side. And based on the reactions of my colleagues, everyone agrees it definitely kinda sorta mostly looks like her, so good job! 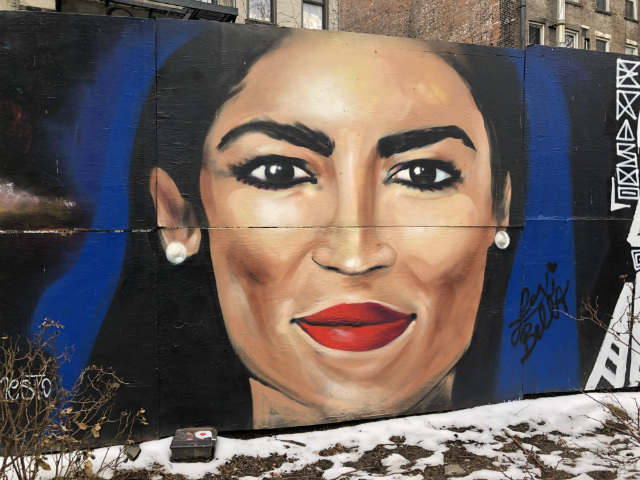 It took about four hours for artist Lexi Bella, who has previously put up portraits in honor of everyone from Martin Luther King Jr. to Frida Kahlo, to complete the mural in January. The approximately 10-by-8-foot painting is currently up inside the First Street Green park—which has around 20 murals up at any given time—on Houston close to Second Avenue.

"I was so moved by her being sworn in in January,” Bella told the Post. "It was such an incredible David & Goliath story when she beat Crowley in the primary battle, and I think she actually embodies the kind of politician that the people who built this country intended...She’s the embodiment of inspiring change."

Passersby had a range of reactions to the mural. Fabian from New Jersey told Gothamist that, "She hasn't really done anything yet" to warrant her own mural. One woman speeding by shouted, "AOC!" with a raised fist. Another person named Bridget said she absolutely deserved the mural because "she's a wonderful local hero!" Even Ted from the Lower East Side had to agree: "Yeah, that's AOC. She's probably the stupidest person in Congress, so I don’t know whether she deserves a mural but people should know who she is."

Matthew Marblo, who described himself as a "huge supporter of her," told the Post, "She just got elected. She hasn’t exactly done much yet and she is already on a mural. She is more a symbolic figure right now." Terry Rogers, a 74-year-old retired nurse who lives nearby, called the mural "crap:" "I like her, but I don’t know if I like the picture. It’s a cliche. She’s more interesting and subtle than that," Rogers said.

Several other people offered a mix of responses to Gothamist, but perhaps the most remarkable thing is that almost everyone seemed to instantly recognize the freshman politician. And that no one mentioned she's wearing pearl earrings instead of her trademark hoops.

Ocasio-Cortez will deliver her Inaugural Address this Saturday in The Bronx. It was also announced today that she will be the first guest on Desus & Mero's Showtime series premiere on Thursday February 21st.

#alexandria ocasio-cortez
#LES
#Lower East Side
#manhattan
#murals
Do you know the scoop? Comment below or Send us a Tip