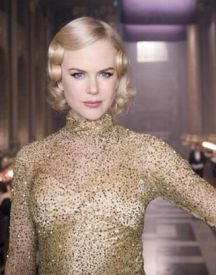 The reviews are in for the $180 million production of The Golden Compass, and they’re lackluster at best, which is a pity not just for fans of the novel from which it’s adapted but for New Line Cinema, which was banking on another Lord of the Rings cash cow.

Times critic Manohla Dargis calls it flawed and cluttered, although her description of Nicole Kidman ought to sway any dudes reluctant to see a movie starring a twelve year old girl and a bunch of CGI animals: "Ms. Kidman is the films’s most spectacular effect... When she first appears, she pours across the screen like liquid gold, her body provocatively shifting inside a shimmering, form-fitting gown, her gilt-blond hair and alabaster skin all but glowing."

One “adult”, no child, please! But not for the NY Magazine Vulture guys; they’re dismissing it as “lame” and “incoherent”. Seems they got their hands on the aborted first draft of the screenplay by acclaimed playwright Tom Stoppard and were surprised to find it far inferior to director Chris Weitz’s adaptation, which only made it to the screen in a highly bastardized form. To hear them tell it, the best parts were left out of Weitz’s 2004 version of the script, “dooming The Golden Compass to mediocrity.” Still, liquid gold Kidman. 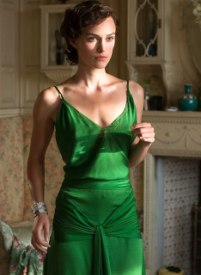 The Times' other movie critic A.O. Scott has little interest in Atonement, the period drama set in England around the time of WWII. Adapted from an Ian McEwan novel, the film stars Keira Knightley as an aristocrat who falls for the help (James McAvoy) before he’s sent away as cannon fodder. Scott finds it lacking in “dramatic coherence and intellectual focus.” He goes on:

The film’s treatment of the war has a detached, secondhand feeling. And even the most impressive sequences have an empty, arty virtuosity. The impression left by a long, complicated battlefield tracking shot is pretty much “Wow, that’s quite a tracking shot,” when it should be “My God, what a horrible experience that must have been.”

Still, aristocratic Keira. The Observer’s Andrew Sarris couldn’t disagree more – it’s nothing short of “an enduring cinematic masterpiece” in his eyes. Who to trust, Scott or Sarris? We saw the preview and thought it had potential. 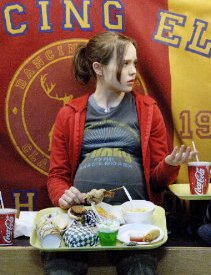 We suspect that plucky ingenue Ellen Page will end up with the biggest per-screen gross. Page stars in Juno as the title character, a high schooler who gets pregnant and decides to have the baby. Her parents are played by Allison Janney and J.K. Simmons, Michael Cera plays her friend and Jennifer Garner and Jason Bateman are prospective adoptive parents. Give this casting director an award already!

With a 92% freshness rating from Rotten Tomatoes and accolades like "Hollywood's Woman of the Year is a pregnant 16-year-old, the incredibly hip, smart-mouthed and totally endearing heroine of the wise and witty Juno" from Lou Lumenick in the Post and "This is an indie crowd pleaser that's much more enjoyable -- in other words, not nearly as horrifying -- as Little Miss Sunshine" from Stephanie Zacharek of Salon.com, we bet the three movie theaters (AMC Loews Lincoln Square, AMC Regal 42nd Street, Regal Cinemas 14th Street Union Square) showing the Jason Reitman film will be packed to the gills with cineastes wanting to ride the wave of good reviews.

What’s your take on this and the other big holiday movies clogging the chimney? Beowulf IMAX 3-D anyone?