Remember last year when Tanlines, a band that had been around for years, released their first proper full length album—Mixed Emotions—and blew up, like way out of the Brooklyn bubble many bands live and die in? Here are the New York-based bands we're anticipating will have that kind of moment this year. 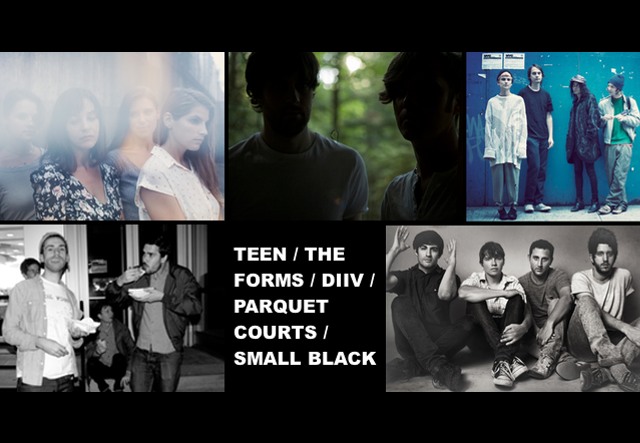 SMALL BLACK: In 2010, following the release of their Jagjaguwar debut New Chain, we took Small Black up to the top floor of the abandoned 5 Beekman building—the band is equally impressive in the studio as they are playing a raw, stripped down set like they did that day. This year they're releasing their highly-anticipated second full length, and singer Josh Kolenik tells us they've been "cooped up for a year at home in Brooklyn learning, recording, and looking for calm in a world teeming with distractions and side-stories. In a few months, we'll let the notes, the phrases, the snares, the bells that make up our new album loose. Can't wait to share."

PARQUET COURTS: Parquet Courts somehow make a band with two guitars, a bass, drums, and vocals (from Brooklyn!) sound new, likely because they actually care about their songwriting. When played through headphones, the 2-minute-give-or-take cuts off their first full-length Light Up Gold inspire a quickened pace on the F to 6 transfer staircase or will make you scrub your roommates hair off the shower drain with a feedback-induced fury. But live, it's all fun. And spilled beers. Oh and the lyrics won't make you cringe when you sing along, which is pretty hard if you're not writing with energy drink commercial licensing in mind. Check them out at 285 Kent this Saturday.

THE FORMS: During their time as a band, longtime Gothamist favorites The Forms have transformed somewhat drastically, most recently stepping out of their sound laboratory a reformed rock band gone electric—think intense-pop and punk rock you can dance to. This year they'll release their first album since 2007, which will also be the first full-length offering of their newer sound—though a glimpse of that was given in their remix EP from 2010, which featured members of The National and Dirty Projectors (listen below). Drummer Matt Walsh explains the sound like this: "I like to think that it's a field recording of traditional music from a planet on the other side of the galaxy, something that Alan Lomax would have done if he were a space traveller." And singer Alex Tween tells us, "If you can picture Janet Jackson covering Toto's 'Africa' but recorded by Steve Albini, that's kind of what the album sounds like." The album, along with their two previous LPs, was recorded by Albini at his Electrical Audio studios in Chicago. Look for the new release, and shows, later this year.

DIIV: This dream-pop, sleepy-melodic rock band's been kicking around Brooklyn since 2011 as Beach Fossils guitarist Z. Cole Smith's side-project. Then, they were called Dive, and mostly stuck to playing shows at local DIY spots like the dearly-departed Monster Island, among others. But they've since changed their name, dropped an album (Oshin, on Captured Tracks in June), toured with Japandroids and racked up rave reviews on Pitchfork and Stereogum. This year, they'll be bringing singles like "How Long Have You Known?" and "Doused" to the West Coast at Coachella, and expect to see them headline a few shows at Glasslands and other local venues in the near future.

TEEN: This Brooklyn lady-group, the brainchild of former Here We Go Magic bandmember Kristina "Teeny" Lieberson, dropped bouncy, poppy, rocky LP In Limbo last fall, and have since played a steady stream of shows all over town. Cheery, buzzy singles like "Electric" and "Better" have earned the group accolades from plenty of music blogs, and they even got to open for psychedelic sound king Ariel Pink at Webster Hall in September. TEEN's running around on tour with fellow local group Memory Tapes right now—expect to hear quite a bit about them in the months to come.

#bands to watch
#best of gothamist
#DIIV
#Music
#parquet courts
#Small Black
#teen
#The Forms
#original
Do you know the scoop? Comment below or Send us a Tip