Bess Vanrenen, Editor, Generation What?: Dispatches from the Quarter-Life Crisis 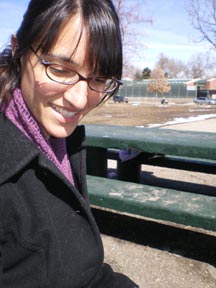 The existentialists said that when we confront death, we realize that our death is our own, that no one can die for us, and, as a result of the latter, that no one can live for us either- that we're free and responsible for our own lives. Some may find this realization empowering; others may be overwhelmed. For many, leaving college and trying to become an adult can have the same effect. Generation What? is a compendium of accounts written by people in their twenties doing just that, detailing how they felt and what it meant to them to realize that they were free. Gothamist sat down with Bess Vanrenen, editor and contributor to Generation What?, to get to know a little more about this project.

How did the book come to be?
It started as a conversation between Jared Jacang Maher, who's one of the contributors, and myself. He was doing a book review of a local author who had done a self-help book on the quarter life crisis. We were talking about how that self-help model doesn't really work in that scenario because a lot of young people don't really read self-help books. Then we mentioned how what we liked most about those books were the quotes from the twentysomethings and that it'd be a lot more interesting to have a book of essays written by people who were going through a quarter life crisis or who have gone through one.

The other part of it was that, like a lot of young people, we think that the term quarter life crisis is a little annoying and that just that it exists as a pop culture phenomena is annoying too. I remember a period in 2005 when practically every single one of my friends was complaining that they were feeling depressed or anxious. We were wondering, "What's going on? Is there something in the air?" I think it was just that we were all in that time in our life whether you want to call it a quarter life crisis or not, it is something that people are experiencing.

What's a quarter life crisis?
It comes at the point when you finish doing all of the things that were already laid out for you to do and suddenly there's no more pre-designed structure for your life and you have to take it upon yourself to say, "Okay, now what do I want to do." That's difficult because you might have had a preconceived notion of what your life would look like in your 20's and living at home at your parents or being in debt for 20 grand isn't what you imagined.

Do you think that the term quarter life crisis is apropos? If not, what might a better term be? It seems like the word crisis implies that it's wrong and that someone is at fault.
I don't really like the term either. I guess it just caught on for some reason, maybe because more people were feeling that way. I remember when I first heard it; I thought it was a pretty stupid term. It's not really a crisis, more like a transition. But for whatever reason, the transition is happening more and more slowly in a lot cases, and that starts to be uncomfortable, I think. Like you're stuck in limbo.

In the beginning of your piece, your crisis had already begun. How'd it come to be and what made it easier for you to get through?
For me, it was that I had postponed looking for a job. I don't know if it was conscious, I guess I had just always thought I'd go to graduate school, but when I was still at school at 25 and realized I didn't know what I'd be doing when I got out, I knew I had to figure out what I'd do with my life. I didn't really do anything at the time to make myself feel better except that I decided that I didn't want to be in that state of limbo anymore and decided to get a job as soon as possible after I finished graduate school. In retrospect, I'd say that you could try not to get so caught up in your own head and do something that doesn't involve yourself for a while. Volunteering might be a good option because I think part of the problem is that you're so focused on yourself, your image of yourself, and what's going to happen next in your life. I saw a therapist and I think that that can be helpful for a lot of people during a transitional time.

In one of the essays, the author writes about how she realized she had developed the habit of making her bed in the morning, which she thought was distinctively adult. For you, what are some signs that you're becoming an adult?
I put a lot of expectations on my parents and I hadn't even realized that I was doing it. I thought that they'd always be able to send me a couple of hundred dollars if I needed it. And I certainly wasn't getting a lot of money from my parents, but just that extra padding everyone once in a while was good. Or, if I had a problem, I could just call my mom and talk about it with her. I'm not saying you can't do those thing. For me it was just realizing that my parents weren't responsible for me anymore and that I was the only one who was responsible for myself. I am embarrassed that it took me until 25 to realize that, but those things happen slowly. Another thing was that, today, I put the water bill in my name for the first time.

Do you have an "only in New York" story?
I did an internship in New York just before the time period in the essay. I didn't know anything about publishing and I didn't know I was getting into a copy editing internship when I really wanted an editorial internship. While I was there, I came up with a goal for myself: that I would come up with a pitch for an article and send it out while I was there. I got a hold of a C-list musician and said, "I'm not sure I can get the article published, but I'd like to do an interview and since I'm doing an internship at a publishing company there's a chance that I can pitch it to them." He got back to me with a yes and asked if I'd want to meet at The Soho House. I had no idea what that was because I'm from Colorado and was only visiting for the summer. I met him in the front and he had to get me in and I was getting the idea that it was a swanky place, but I didn't know or care. Later, I was watching Sex and the City and realized, "Wow, I was at this fancy-schmancy club that you can only get into by invitation." Unfortunately, I never got the article picked up.

Given the opportunity, how would you change New York?
I'd make it so that the subway wasn't so hot and stinky in the summer time.

Which New Yorker do you most admire?
A New Yorker I admire-- albeit a fictional one -- is Miranda Priestly, from The Devil Wears Prada, largely because she's an image of a successful woman who doesn't "have it all." The idea that a woman can have a fabulous career and family life is a little unrealistic, and it's nice to see a female character who works like a dog, reaps the rewards professionally, but suffers some in her family life. It's just more realistic. It can go the other way, too. A woman with a wonderful family life may have to deal with a few setbacks professionally, and I admire that choice also.

What's your idea of a perfect day of recreation?
Going to a museum, going to a park, getting some food, maybe a picnic, going to someone's apartment and hanging out on their roof, and then head to a bar in the evening.

Bess and other contributors will be reading at McNally Robinson on Thursday, July 19th at 7 PM.