With the city's beaches set to open in less than a month, questions remain about whether the Parks Department will be able to get them ready in time. As we reported this morning, the boardwalks at Rockaway Beach still have a long way to go on the road to...well, existing. And now we're wondering where the hell people are going to go to the bathroom at some hurricane-hammered beaches. (And please don't say the ocean, that's VIP only.)

Earlier this year the DOT revealed sexy renderings for new temporary prefabricated bath houses that would be delivered to some beaches in time for Memorial Day. The space age modules will rise 16 feet above the sand at beaches in Brooklyn, Queens and Staten Island, where Hurricane Sandy did significant damage to the permanent facilities. In addition to bathrooms, they'll also feature lifeguard stands and offices for Parks workers.

But it now appears that beachgoers will have to cross their legs and wait for the new comfort stations, which reportedly cost almost $2 million. 35 modular units are expected be installed at 17 locations for a total cost of $105 million, but it's unclear if they'll arrive in time for the beaches to open. The first ones were supposed to be delivered from Coney Island tomorrow, but Parks spokesman Arthur Pincus tells the Daily News, “I do not have a new tentative date."

In early April, we began driving piles to support these new lifeguard and comfort stations, without which we cannot reopen the beaches to the public. After the piles are installed, prefabricated comfort and lifeguard stations will be delivered. The comfort and lifeguard stations are now on an assembly line and preparations are underway to truck each building to its new home atop the recently-installed piles.

We asked a spokesperson whether that information is still accurate and were told, "While it’s true that delivery has been postponed, the statement is still correct—the modulars are being fabricated and preparations are underway to transport and install them." In the meantime, we guess there's always the bathroom at Cha Cha's. Oh, wait. 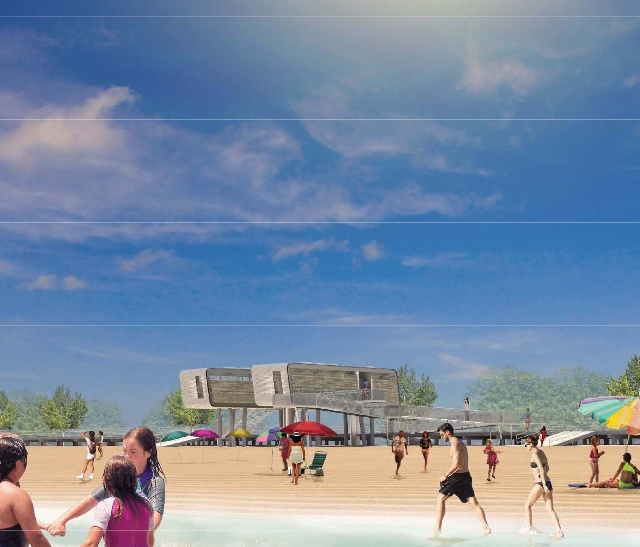 #bathrooms
#beaches
#comfort stations
#nyc
#original
Do you know the scoop? Comment below or Send us a Tip