Behold, NYC's Old Subway Cars At The Bottom Of The Ocean There is nothing more satisfying than seeing the city's subway cars—stages of so many sigh-inducing commutes and a variety of other horrors—getting unceremoniously dumped into the vast, blue ocean. It's a place where they are free from manspreaders and the MTA—a place where they transform into something a little more useful, it turns out.

As we know, once these old retired subway cars hit the ocean floor (all 18-tons of them), they begin their new life as artificial subway reefs, creating "a flourishing new habitat for varied sea life including sea bass, tuna, mackerel, flounder, blue mussels, sponges, barnacle, and coral, and improved marine environments in areas of the ocean floor that were once barren deserts." Think Barnacle Bike, but bigger.

The subway reef program ran from August 2001 through April 2010, when the MTA "deployed more than 2,500 deaccessioned train cars to underwater locations off the coasts of New Jersey, Delaware, Maryland, Virginia, South Carolina, and Georgia." This included the carbon steel "Redbird" cars, and stainless steel "B-Division/Brightliner" cars, which were all refurbished into "cleaned shells " before being thrown overboard. This means they were stripped of motors, wheels, hydraulics, lighting, Freon from the air conditioning systems, seats, and windows. 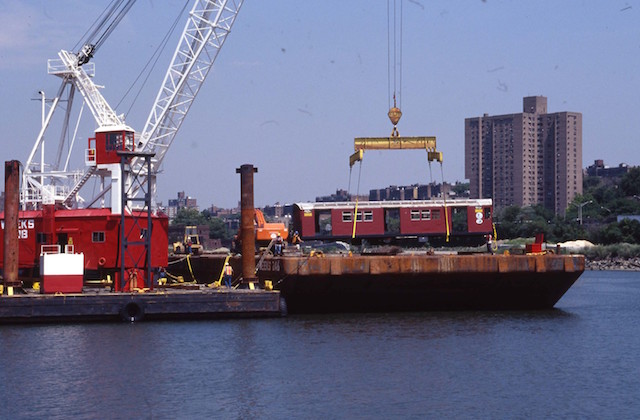 Unless you dive into the void somewhere along the Atlantic seascape where these have landed, the best way to see them now is at the New York Transit Museum’s Grand Central Gallery, where their new exhibit, Sea Train, opens today, March 20th. The exhibit features subway reef photos by Stephen Mallon, "many exhibited for the first time," they say. His images "capture the seemingly impossible: iconic subway cars dropped like toys by brightly-colored cranes off hulking barges."

According to the museum's press release, Mallon spent 2008 to 2010 documenting the program, which "spurred the creation of miles of artificial reefs" and "helped the agency avoid $30 million in disposal costs." It also helped in growing fish populations and otherwise benefiting marine life. Here's some great footage from Charleston Scuba, showing the reefs many years after they were dumped there:

Will the program return? Likely not. While it "proved cost-effective for decommissioning large fleets all at once, it may not be as efficient going forward given New York City Transit’s current standard of decommissioning only a few cars at a time."

#exhibit
#new york transit museum
#subway reef
#subway reefs
Do you know the scoop? Comment below or Send us a Tip