One of the most eagerly anticipated exhibitions this year is the New York Botanical Garden's CHIHULY — featuring glass installations by living legend Dale Chihuly, whose organic forms have been showcased around the world (in 1996, Chihuly's they were rigged over the canals of Venice). The stunning show opens Saturday, April 22nd.

Chihuly has pushed the boundaries of glassblowing for decades, and this show, essentially a Chihuly career retrospective set for the outdoors, shows 40 years of glass work that was made in studios around the globe. Chihuly, who just turned 75 years old, studied interior design and weaving in college before eventually devoting himself to glass. He received a full-ride scholarship to the University of Wisconsin's glass art program (the first such program in the nation) in 1966, and won a Fulbright scholarship to study with Venetian glassblowers in 1968. 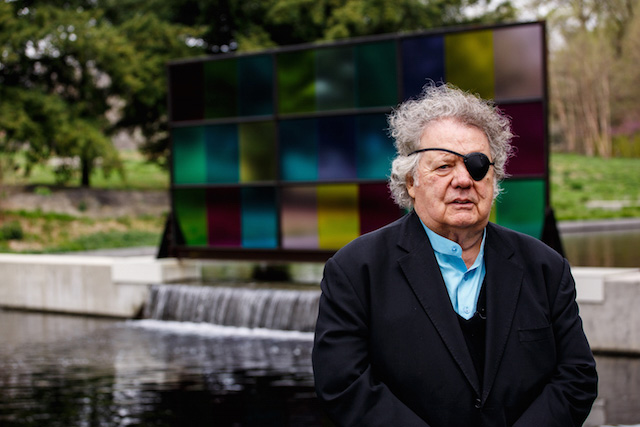 The artist had a show at the New York Botanical Garden in 2006, but the NYBG says the new exhibit is much larger and much more fully-realized. Gregory Long, the NYBG's president, referenced the 2006 show as "only a taste of the real thing... this one is bigger and better." CHIHULY incorporates a broader and more diverse terrain across the garden, from inside the Enid Haupt Conservatory to the Metz Library and all around the wooded grounds.

There are more than 20 installations of Chihuly's beautiful glass works all in all. His staff and the NYBG worked together for two years as they prepared for the opening and installation of the works took three weeks, with many large trucks from Seattle delivering the glass pieces.

The NYBG staff carefully chose plants that would complement Chihuly's glass works, meaning that the gardens have been replanted and, in many cases, to a drastic degree. As a result, some of the glassworks are camouflaged by nearby ferns while others stand out in stark contrast. This is one of the strongest aspects of the entire show—that man-made glass and natural flora are in perfect sync.

Highlights of the show include Scarlet and Yellow Icicle Tower, a structure of blown glass and steel that stands over 30 feet high in the conservatory's courtyard. Also not to be missed is White Tower and Pink Fiori, a piece made in 1997 in the Czech Republic. In order to achieve the beautiful soft pink of the piece's glass flowers, Chihuly mixed iridium—an elemental metal—into the glass's silica and sand. Because iridium is illegal to import to the United States, the piece had to be fully finished abroad before it could be brought to America.

Another breathtaking installation is Neon 206, a busy outdoor work that features over 1,100 feet of neon and acrylic arranged into a glorious tangle. The piece is permanently illuminated, which means that fans should also make trip to the garden to see it and other works after dark (there are "Chihuly Nights" planned between April 29 and October).

CHIHULY runs from April 22 through October 29 at the New York Botanical Garden. There's an opening weekend celebration on Saturday and Sunday, and in August, a "Chillin' with Chihuly" program will feature live demonstrations of glass-blowing.