In 1977, Dr. Jonathan Zizmor, of the Subway Zizmors, wrote a book marketed towards women called Dr. Zizmor's Skin Care Book. The 215-page advice book which no one seems to have ever written about (it came at least a decade before his transit ads) promised to share the knowledge he's gained as a big city doctor, with at-home beauty regimens, "advice on diet, sunbathing, bathing, sex," and explanations of some of "the mysteries of dermatology."

I recently learned this book existed while searching Dr. Zizmor on eBay in hopes of finding one of his iconic subway ads to decorate my home or office. The cover wasn't filled with cheesy rainbows like his ads, in fact it was quite the opposite: a gorgeous pink and yellow color palette with perfectly of-the-era fonts. Obviously, I had to purchase it. I found one online for $8.50, and anxiously awaited my First (and probably only) Edition, mint condition, never-cracked, little piece of New York City history.

Beauty and diet advice for women written by a man in the 1970s? Surely this has aged well. Let's flip through the pages, shall we.

You know, "medical facts," and science, and doctor words and... completely ill-informed judgements and a whole lot of other bullshit. For example, while praising glossy beauty magazines like Vogue and Cosmopolitan, Dr. Z warned his readers: "There's a diet editor on one of the big magazines who weighs nearly two hundred pounds! Which only goes to say that you can't trust anybody all of the time." JFC, Jonathan.

Ironically, while alleging untrustworthy diet advice was being doled out by an editor whom he believed weighed too much to give valid advice, he also offered his own. And hoo boy, Dr. Z had some fascinating ideas about what you should eat and when you should eat it. Here's what he suggested for breakfast, in his own words:

Yes yes, that all sounds like a fine meal, but the kicker is what he suggested if you don't have time for all that—"Rush alternative: French cruller." Amazing leap, doctor. For lunch he recommends tuna salad, or... as a "rush alternative: McDonald's Fish Sandwich (without the bun but with the cheese... don't be surprised, it's actually good for you!)." Every suggestion appears to come with a punchline. He also notes that fast food "won't hurt you," and that your best bet there is KFC's fried chicken, because "it is a fact that chicken, even when it's deep-fried, is relatively low in calories." Yeah, this seems untrue.

Finally, he recommends this neat "dieter's trick," noting one should "save dessert until just before bedtime or at least until after the dishes. Then have a slice of cantaloupe, or a piece of pie or pound cake and one cup of coffee." Listen, I'm no doctor, and somehow Jonathan here is a doctor, but this advice sounds kind of like incredibly bad advice, no matter what decade it's coming from.

Dr. Z goes on to recommend that you stay away from "ethnic foods" (particularly Chinese and Jewish cuisine) but notes there is this one exception. "An excellent ethnic dish that's a true natural food and is available quite widely... It's called pizza! The crust is filled with Vitamin B, the cheese is a good source of Vitamin F. It's great." Did a child write this section?

To recap: French cruller for breakfast, McDonald's for lunch, pizza for vitamins, and be sure to eat cake and drink coffee right before you go to sleep. With these tips, he says, you can "become the master of your own figure."

Dr. Z didn't just have thoughts about what you should eat or how much you should weigh, ladies, he also included advice on:

Other chapter titles include "Black and Beautiful," and "How To Take A Bath." He also covered STDs: 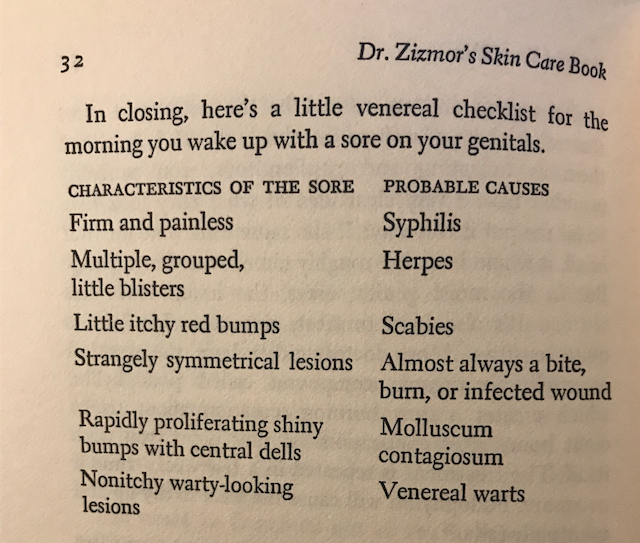 There's not a whole lot of information available about how Dr. Zizmor's books were received or if anyone ever purchased one prior to me. He published these before his subway ads debuted, during an era when advice manuals were still quite popular (thanks David Reuben, MD) and likely a dime a dozen. Prior to this he had another book (called Super Skin, 1976), and he followed up this book with another one published in 1978, titled: Dr Zizmor's Brand-Name Guide To Beauty Aids And Everything You Want To Know About Them And Whether There's Anything There That'll Hurt You And Most Of All Whether They Really Do All (Or Even Some) Of The Things For You That The Labels Say They Do. For real. I bought that one, too. 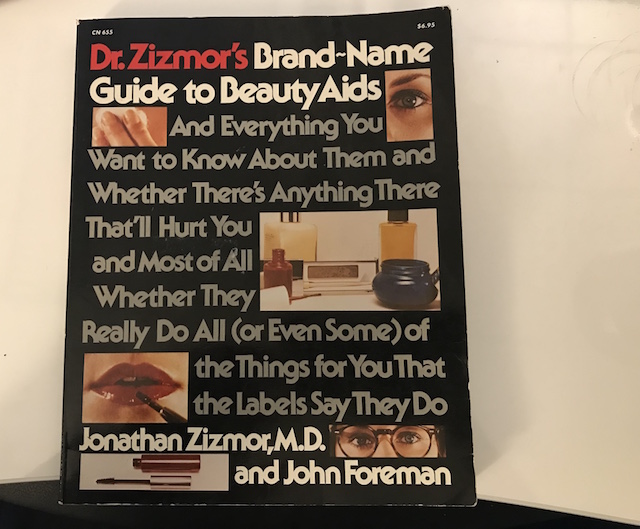 By reading this, will my skin become as smooth as this title? (Jen Carlson/Gothamist)

To be fair, while Dr. Z may have been kind of a fat-shaming jerk, not all of his thoughts were complete garbage. He also offered some perfectly okay (albeit common sense) advice, like make sure your plastic surgeon is a real doctor, chlorinated pools and too much sun exposure isn't great for your skin, soap is good, and so on.

Dr. Zizmor retired in 2016 and left NYC, and I like to think he's out there somewhere downing pound cake and coffee every night before bed, being THE ETERNAL MASTER OF HIS OWN FIGURE.

#1970s
#advice manual
#author
#books
#dr zizmor
#original
Do you know the scoop? Comment below or Send us a Tip