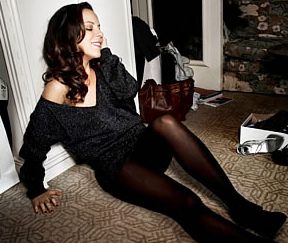 Bebel Gilberto was born in New York City to legendary musicians João Gilberto and Miúcha. Raised in Brazil, she made frequent trips back to her hometown -- even performing at Carnegie Hall before her age was in the double digits. 13 years ago she made the move back here and has continued to create music on her own and with other musicians. Her latest album, Momento, is her first in three years and tomorrow night she'll be playing some of those new tunes at Webster Hall.

You performed at Carnegie Hall with your mother and Stan Getz at age 9. What was that experience like?
I was very nervous but also unsure what the big deal was.

You've collaborated with a diverse group of artists so far throughout your career. Is there any collaboration that stands out for you?
My collaboration with Mike Patton. Also my work with Forro in the Dark.

What did you work on with David Byrne, and what was that like?
He is a very serious person but at the same time very funny and generous.

What can listeners expect from your latest cd, Momento?
They can expect true stories. It's also my best record, one that I contributed to in every respect, from writing to producing to singing.

Before your tour this year it was reported that you broke your foot and used Skype to rehearse with your band during your recuperation - did that work out alright? Are you still recuperating?
The Skype thing worked out under the extreme circumstances but I don't recommend it unless you happen to be on the other side of the world, separated from your band. I am still recovering from my broken ankle. It takes over a year for this type of injury to heal.

Having lived in New York for about 13 years, do you foresee leaving any time soon?
I'm unpredictable, so who knows...

Which New Yorker do you most admire?
Woody Allen

What's your idea of a perfect day of recreation in New York?
Walking around. There's so much to see...I love to spend the day doing nothing and Central Park is a great place for that.