Every so often Charles W. Cushman's photos from the 1940s and 1960s get bounced around the internet again, and with good reason: they're fantastic. Everything looks like a Hollywood set—colorful, clean, and almost not at all like New York City, in some shots. You half expect to spot Gene Kelly swinging around lamppost, or Truman Burbank to realize it's all a backlot. Perhaps that's because in an era we have mostly seen documented in black & white, Cushman brought to life in full color. 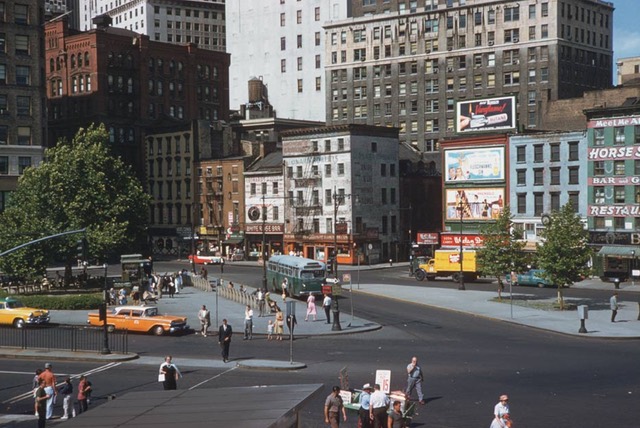 Not a whole lot is known about the man behind the lens—Cushman died in 1972, and his 2nd wife Elizabeth said of him, "[he] was a shrewd individual... a sharp evaluator of people, and was very prudent and shrewd... He loved life—music, good books, sports, the outdoors, travel, integrity... and could not tolerate ignorance." Photography wasn't his occupation, but he did it well, and he took his camera on many travels, shooting everywhere from Austria to Greenland to the Bahamas to France, and all over the United States.

A few years ago his images were almost tossed in the trash, but they were saved and eventually digitized by Indiana University (you can listen to that story on NPR). These shots were taken during a July 1960 visit to New York City.

#1960
#1960s
#charles w. cushman
#flashback
#original
Do you know the scoop? Comment below or Send us a Tip
A new Gothamist is coming! We’ve moved comments over to our beta site. Click here to join the conversation and get a preview of our new website.