Be Transported To Krypton With Mike Kelley's Dazzling Superman-Inspired Sculptures If you've ever wanted to take a trippy visit through Kandor, the capital of Krypton and Superman's birthplace, now's your chance with Mike Kelley's sculptures and videos, currently on view at Chelsea gallery Hauser & Wirth. Kelley, who committed suicide in 2012, once said that Kandor was Superman's "perpetual reminder of his inability to escape the past, and his alienated relationship to his present world."

The exhibit contains three main rooms, the first being a gallery of eight vibrant colorful cities made out of tinted urethane and lit from below. Those familiar with Kelley's intricate work will immediately recognize his obsession with minutiae and intense hues straight away, and this play of color and shadow continues throughout the new show. 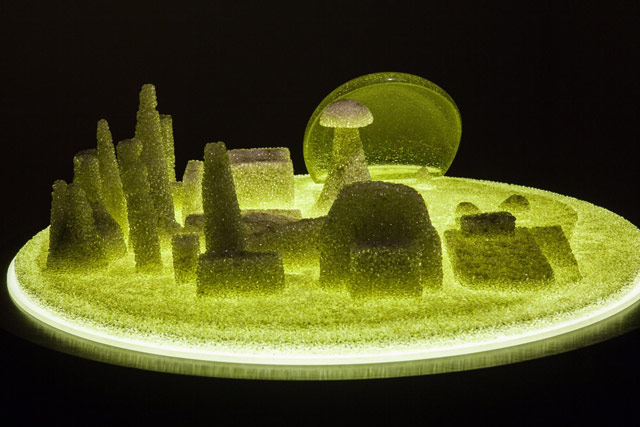 The show's comic book heart is palpable, with framed lenticular prints in the second room changing as you walk past, simulating the turning of pages. Kelley repeats his theme of the shining, contained city in practically every hung print. We see metropolises trapped in test tubes—it might be a metaphor for the modern world, or for Kelley's own brilliant, manic, and barely-contained mind.

Video of one of these covered cities, made by Kelly himself, plays on one of the walls. The glass test tube that covers the city is gradually filled with gas, and the audio of that seeping vapor is played over speakers throughout the gallery. At every moment, the entire exhibit sounds as if it's breathing. 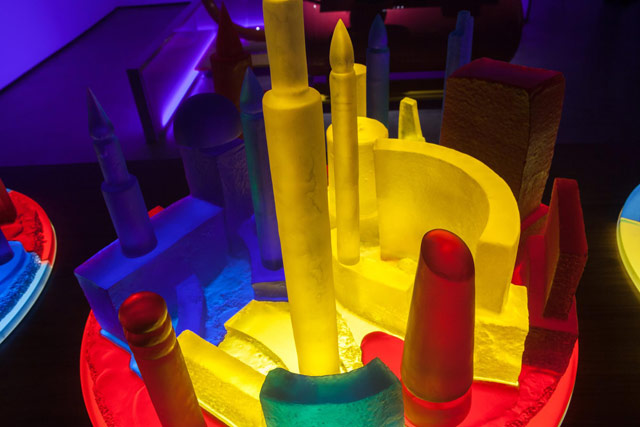 Perhaps most stunning is the third room and its giant Kandor 10B (Exploded Fortress of Solitude), which presents a kind of post-apocalyptic take on Superman's famous cave retreat. It's massive and full of gnarled detail on just about every surface, and at the center (Hauser & Wirth encourage viewers to step inside) we see one final illuminated, enclosed city, along with a small niche of shining jewels. These glimmering riches in the middle of ugly decay form the climax of the entire show.

But for the fortress to really be understood, one must spend some time watching Extracurricular Activity Projective Reconstruction #36 (Vie Anglais), a 24-minute video populated by people dressed as craven clowns moving around the very same giant cave that's on display. One clown beats a shackled woman's exposed ass with a riding crop while the others laugh and clap along to the sound of leather slapping skin, and we're made aware that this...thing...was considered by Kelley to be a site of torture and punishment. The Exploded Fortress of Solitude is in truth a psychedelic unhinged pseudo-sexual torture locale and a metaphor for Kelly's own mind (also perhaps American pop culture itself?).

Kelley's work is beautifully messy, but the show is carefully curated and, while nowhere near as large as MoMA PS1's giant retrospective last year, feels just right in its limited size. These works have so much happening inside them, and so many potentially useful interpretations, that anything more would be sensory overload.

#gallery
#Hauser & Wirth
#kandor
#mike kelley
#superman
#original
Do you know the scoop? Comment below or Send us a Tip