The tenements. The ministry. The decrepit lot of rubble. The disco, or the back-alley party, with vices as loud as the DJs beats. These places, and the energy they contain, founded hip-hop’s history and mythology. As time presses, facts and lore intertwine. Embellishment of conditions, mentors, aims, and emotions are the poetry in tandem with some sick beats and explosive visuals, fulfilling every sensory need.

Fitting, then, that Baz Luhrmann’s (Romeo + Juliet; The Great Gatsby) fabulist approach to young love, bursting creativity, and worldly indulgence should find The Get Down, Netflix’s newest original programming. The six-part musical drama charts hip-hop’s seeds in the South Bronx, circa 1977, mostly through the eyes of young Ezekiel (Justice Smith), who seeks an outlet for his skills as a wordsmith. As he and his friends face teenhood with higher stakes, bigger dreams, and deafening songs in their hearts, entire cultures grow beneath their sneakers in a city en route to restrictive cleanliness. Though Luhrmann tackles the show’s panoramic scope with assistance from Pulitzer Prize-winning scribe Stephen Adly Guirgis and executive producers Nas and Grandmaster Flash (portrayed here with shamanesque cool by Mamoudou Athie), The Get Down implodes from its own ambition, letting a well-established artist’s swagger interfere with history and memory.

Before completely nestling in the late 1970s, we begin in 1996, as a rapper (presumably an older Ezekiel) begins telling his story. Though it seems redundant, we’re given contrast; it’s important to remember that hip-hop had to scrape and crawl to fill a humongous stadium. Yes, it had to begin in the cramped, broken homes where prospects slimmed, where record spinners and graffiti artists were the kinds of people uptight parents warned you about. They have to present disco as the bloated saturated norm for hip-hop to react to and one day become a saturated norm. But for Ezekiel’s crush, Mylene Cruz (Herizen F. Guardiola), to be like Donna Summer is everything. And she could; she’s got the talent for it. But her father, Pastor Ramon (Giancarlo Esposito), forbids its sexual nature.

Comparisons to West Side Story have already been drawn, but the preoccupations of The Get Down’s leads are less romantic than they are for the respect of fellow creatives. Finding faith from Shaolin Fantastic (Shameik Moore), a protege of Grandmaster Flash who always moves as though in a kung-fu film (all the way down to the sound effects), Ezekiel leads his friends—none of which are as well-etched as he—into the hip hop troupe Fantastic Four Plus One, finding creative ecstasy even as bullets fly and young, dumb mistakes are made.

What also separates The Get Down is an overzealous preoccupation with political climate. While factors of oppression play directly into inner-city art, a lot of screen time is dedicated to corrupt councilman Francisco Cruz (Jimmy Smits), whose pull with criminals connected to the record biz hooks up studio time for Mylene. But getting into his own personal problems and such feel padded, stretching out the cliches of known “rising star” movies with a lot of scenes with men yelling at each other for reasons completely unrelated to the main conflicts. The big-business stuff is where the show slows most, as it doesn’t have the vivid excitement coming from the wide-eyed youngsters, nor does it feel like anything new. The history of hip-hop is one staggeringly overlooked when it comes to depictions. Luhrmann only scratches the surface, prompting the viewer to pine for books instead (which, let’s face it, is no drawback).

Ultimately, the epiphanies and realizations are where the best and biggest excitement comes from, when Ezekiel and Co. discover the back alley party packed or discover the joys of scratching through pot-reddened eyes. Or when Mylene stages an awakened moment in church, followed by a burst of house-rumbling singing, discarding her choir robes for a silver dress. Historical fiction is the proper tag for The Get Down, as the borough’s dealings with financial woes, mayoral campaigns, and a midsummer blackout occur throughout. However, few films or series have kept the grit and politics while retaining magical realism. This is a major step for Luhrmann who has neither tackled a historical drama or long-form entertainment. His challenge becomes striking a balance, jumping from the awed whispers of Shaolin, protege to Grandmaster Flash, who is this show’s Splinter from Ninja Turtles. He doesn’t quite nail it, instead relying upon cliches and clunky, spell-it-all-out dialogue to keep the show from obtaining the naturalism and complexity it could benefit from. 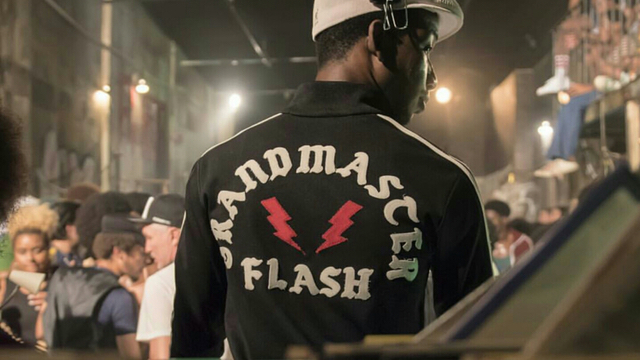 Because The Get Down is more about memory than history, and since movies have helped dictate our memories, much of the show’s New York is plucked from the vivid depictions of the city over the years. The club Les Inferno recalls Carlito’s Way, the trains seem to be non-stop, and all of them caked in spray paint. The streets are never quiet. Perhaps most disappointingly, the environments themselves aren’t recreated here; rather, stock footage is called in, seeing Luhrmann try a hand in docudrama (or just mismanagement of budget). Ultimately, all its presence does is remind the audience how that era is tapped into only on a surface level; too much of the pop-cultural references point at the audience and remind them they are in the '70s. The incidental soundtrack, though eclectic, isn’t used for much thematic purpose, and the recurrence of Can’s German funk track “Vitamin C” brings too much more of a white male presence than is already being inflicted behind the camera. I would have loved to see Hype Williams pull this off.

In Luhrmann’s films, the settings are dictated by their own emotional energy, especially through the gaze of the appointed protagonist. Take Paris in Moulin Rouge!, a city brightened by Ewan McGregor’s possibilities of romance and darkened by their absence. Or the whiplash born of teen angst and civil unrest of Verona Beach in Romeo + Juliet. The Great Gatsby finds in New York a playground for the rich, an overproduced front for what money cannot buy. The longing and betrayal that Luhrmann finds rooted in his geography continues in his version of the Bronx, which we’re introduced to via an inspired graphic zooming past the iconographic Manhattan, the landmarks fully distinguished, to the upper borough, where prosperity’s absence shows in the ruggedness. But no matter; squalor does not dominate this place. Community defines it, allowing Luhrmann to work with a bigger ensemble and more sprawling landscape. Not as manic as his other works, the interweaving storylines allow pace with the characters, and Luhrmann struggles to keep matters of equal interest over the course of six episodes. The lessons from hip-hop sampling were wrongly translated to this show; rather than keep out the wackness from music films’ blunders past, they exist here as a reminder for how we deserve a better rendition of the legends.

The Get Down is now on Netflix.

baz luhrmann
netflix
the get down
Max Kyburz
Read more