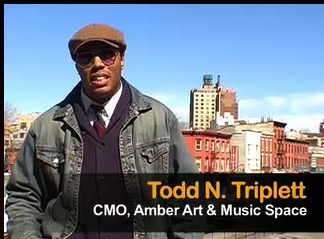 Did you hear about the new arts and music venue opening in Fort Greene? Well, chances are that all of the blood, sweat, tears and money (over $1M) that went into it may have been for nothing. Amber Art and Music Space was being built out of an old liquor store at Fulton Street and Ashland Place by three friends who are now being told they can no longer develop the space.

At the end of August the trio were told by the director of Brooklyn Planning for the city’s Department of Housing Preservation and Development, whose name is fittingly Jack Hammer, that the agency would be seizing their site by eminent domain. The space would be used for the Dancespace Project, a Manhattan-based dance group, ground level retail shops and housing units. Together these new developments would help create a centerpiece for what's being called the BAM Cultural District. The Brooklyn Paper reports:

Lured by the promise of the burgeoning “Lincoln Center of Brooklyn” that the city envisions for the area around BAM, Triplett and his partners invested more than $1 million, and spent a year and a half turning the run-down, three-story space into a performance venue, recording studio and an arts non-profit.

“We were four weeks away from completion, and we get this letter. The city is f—king us,” said Triplett, who has already gotten a liquor license and booked musical acts into 2008. “I’ve never seen anything this egregious. This is in the tradition of Robert Moses.”

The partners claim that no one — including the broker who secured them the space and the landlord, who let them sign a 10-year lease and has collected $200,000 in rent so far — informed them of the city’s plans for the site.

The agency claims they announced this in 2004, and because of their "adequate public notice" they seem to be continuing with their plans. It's a shame, the venue looked like it would have been pretty nice -- with three levels, a stage, VIP area, fireplace and lots of space to enjoy some live music. Take a look at the (raw) inside here (video).