Bathing In Pig's Blood: Inside The Alt-Right's Pro-Trump Art Show I wasn't sure what to expect from #DaddyWillSaveUs, the self-proclaimed "pro-Trump art show" that got booted from its original venue in Williamsburg and boycotted by many media outlets before it ever took place. When I arrived at the Wallplay gallery in Chelsea on Saturday night, I certainly didn't think I'd be leaving four hours later covered in pig's blood, but this election season is just full of fun surprises.

Laura O'Reilly, Wallplay's owner and founder, was handling the situation surprisingly well. "I wasn't informed of the level of blood-spreading," she told me as we stared at the blood-filled bathtub that sat in the far right corner of the gallery. Earlier that night, O'Reilly had put up signs explaining her support of freedom of expression despite her distaste for Trump. To balance things out, she said she plans on donating 100% of the rental fee to Hillary Clinton's campaign. Breitbart quickly jumped on the story, and O'Reilly later told me via email that she's received a flurry of hate mail as a result. 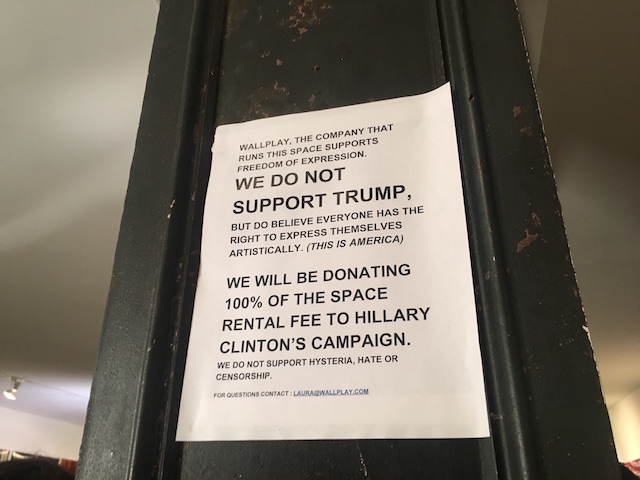 On the blood-spattered wall behind the bathtub were a couple dozen black-and-white photos of people who, according to Yiannopoulos, had been murdered by immigrants.

"Please turn your cameras off me, and turn them to these pictures," he declared. "These are people who were killed, murdered by illegal aliens who had no right to be in the United States. These are the pictures who need not have died but for an elitist, globalist philosophy that puts principles over human life. I'm also going, aside from these victims, to be performing for the victims of Islamic terrorism, too."

But the performance wasn't about them. It wasn't about terrorism or Islam or mourning or grief. It was all about Milo. There wasn't much to it besides him posing in the tub, surrounded by cameras and adoring fans. "Milo, babe, look over here!" a Breitbart reporter pleaded. "Milo, you're so hot!" At some point he started flinging blood onto the crowd, adding to the spectacle.

The entire performance—actually, the entire show—was being recorded for Yiannopoulos's YouTube channel, which raises a question that could apply to Trump's entire campaign: how much of it is genuine, and how much of it is just a self-serving publicity stunt?

Much like Yiannopoulos's public persona, the performance was supposed to be offensive. Liberals were supposed to be incensed by his disparaging of Muslims, his praise of western civilization above all others, and his dismissal of facts. But the truly horrible thing about the performance was Yiannopoulos using the bodies of murder victims as a prop—not even to push an agenda, but to feed his own ego. He claimed he was trying to be provocative, even insightful—instead, the performance was predictable and hackneyed, like he had decided what to do at the last minute.

The rest of the art wasn't much better. Some of it was fun to look at—even I can appreciate the hilarity of George Washington in a #MAGA hat—but it all felt either purely decorative or solely intended to offend as many people as possible, with no substance underneath.

Among the other works were:

Besides the crowd, the show featured all the trappings of your typical gallery opening: there was an open bar, a few trendy millennials (including Wintrich's cousin, a self-proclaimed liberal who Wintrich told me "hates all of this"), and hors d'oeuvres (mini taco bowls and mini egg rolls, both served by men in deliberately racially-insensitive costumes).

Although the show was supposed to go from 7 p.m. to midnight, Akbar announced that it would end nearly an hour and a half before its scheduled time. The floor was covered in blood, the bar was out of mixers, and both Yiannopoulos and Shkreli had already left.

The disorder was most likely due to the fact that the show had been ousted from its original location at The Boiler in Williamsburg. Joe Amrhein, owner of both The Boiler and Pierogi Gallery, told Gothamist on Saturday that he had been duped by Wintrich, who told him the show was supposed to be satirical. Wintrich told me during the show that Amrhein had lied and later emailed me screenshots of his conversation with Amrhein's broker, Sam Reznitsky—but these screenshots only prove that Amrhein was, in fact, confused about the nature of the show.

I stayed in the gallery after the show ended and saw what I thought was a fight, but was actually an induction: the proudly anti-feminist Gavin McInnes was recruiting attendees into the Proud Boys, a fraternity of "western chauvinists." Their pledge: "I am a proud western chauvinist, and I will not apologize for creating the modern world."

After the crowd had dispersed, McInnes and the other Proud Boys attempted to remove the tub from the scene. Their plan was to pour the blood into a sewer grate, but one of them tripped, causing the liquid to spill out onto the street.

Curious about what western chauvinists do for fun, I followed McInnes and his fans to a nearby bar, where he agreed to a quick interview. I asked if he agreed with Niall Ferguson's clash of civilizations argument.

"I don't know who that is," he admitted.

McInnes kept interrupting my questions to ask me a few of his own. "Do you ever worry about getting home safe at night? Are your parents divorced? Are you in a relationship?"

"You're an attractive lady who needs a man," he told me. "If you have a man, he needs to put a ring on it, or he's wasting your time. This is a waste of a career for you. You're just pretending. You need to be making new lives with your boyfriend."

Like everything else I had seen that night, I wondered if McInnes's questions had just been a performance.

There had been true believers in the crowd at the event—real, die-hard Trump supporters who had traveled to take part in the show—but there were few among the artists, who seemed more desperate for followers and attention than interested in any form of ideology.

#daddy will save us
#donald trump
#gavin mcinnes
#lucian wintrich
#Milo Yiannopoulos
#pro-trump art show
#trump
#original
Do you know the scoop? Comment below or Send us a Tip