Basket Of Adorables And More Brooklyn Dogs In Halloween Costumes At The Great PUPkin! More than 100 dressed-up dogs came out to the 18th Annual Great PUPkin Dog Costume Contest in Fort Greene Park on Saturday, and costumes ranged from timeless classics like vampire pups to more topical choices, like doggy Brexit and a basket of deplorables adorables.

For the first time in its 18-year history, PUPkin organizers limited the number of entrants to 120—last year, they had nearly 170 costumed pups, which they said was "too much"—in the hopes that limiting entries would boost the creativity level for costumed dogs and their humans. 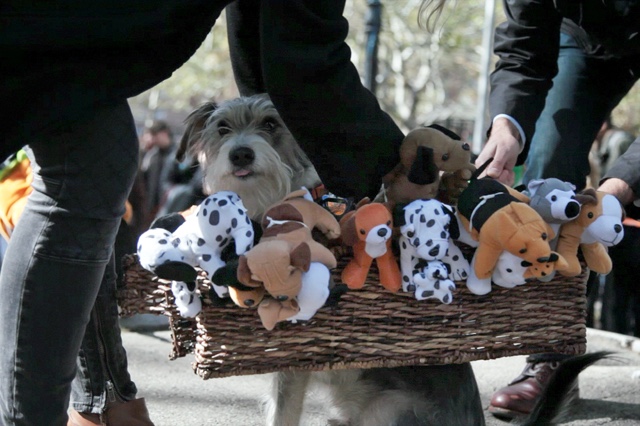 Plenty of pups brought their A-game, but the first-place prize ultimately (and deservedly!) went to the Doggie Llama, while the Fürrestree pup was awarded second place, and the Milkman Joke pup took home the third-place prize. Among the honorably-mentioned cotumes were the Shrink-O-Matic, which shrunk big pups into small; a flashy internet-breaking dog dressed as Kim Kardashian with champagne; and a pup dressed as the always-topical Construction on Myrtle Avenue.

Other #relevant costumes included the aforementioned basket of adorables, a pup that can dig under Trump's wall, and a Mr. Robot-inspired doggy hacker.

#brooklyn
#dogs
#fort greene
#great pupkin
#pupkin
#original
Do you know the scoop? Comment below or Send us a Tip