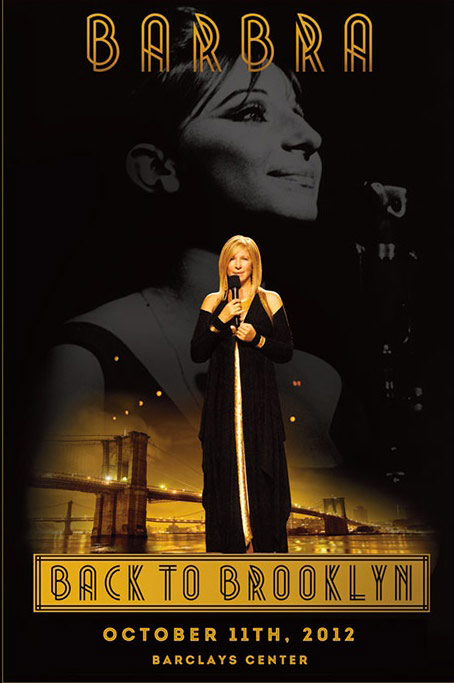 After months of rumors, the Barclays Center has confirmed that Brooklyn native Barbra Streisand will perform a concert at the new venue on October 11. Babs said in a statement, "Brooklyn to me means the Loew’s Kings, Erasmus, the Yeshiva I went to, the Dodgers, Prospect Park, great Chinese food. I’m so glad I came from Brooklyn—it’s down to earth. I guess you CAN come home again."

The Atlantic Yards' Report Norman Oder had reported that Streisand would perform at the still-under construction Barclays Center earlier this month and, this past Monday, found confirmation on Ticketmaster. Barclays (and Brooklyn Nets) CEO Brett Yormark was mum up until today's announcement, saying on MyFoxNY, "I think it was Bruce Ratner's vision, as well as Marty's, to bring Barbra home." Marty, of course, being Brooklyn Borough President Marty Markowitz, who wore a "Brooklyn Loves Barbra" shirt. Markowitz said, "We never had a venue. We finally have a facility that shows Brooklyn respect."

You can read the full release on Streisand's site; Bruce Ratner gave a statement, "When I first thought about building an arena in Brooklyn, I always envisioned Barbra Streisand coming home to take center-stage in her native borough. It’s humbling and almost surreal to welcome arguably the greatest entertainer of all-time to Barclays Center. Barbra is Brooklyn and there’s nowhere more fitting for her to perform. This will be a night to remember." Does Jay-Z know that Ratner thinks Babs is a bigger than he is?

Streisand, who has stage fright, most recently performed publicly in New York at the Village Vanguard, in a tiny 2009 engagement called "One Night Only":

Streisand's last big shows were in 2006, at Madison Square Garden.

#barbra streisand
#barclays center
#brooklyn
#marty markowitz
Do you know the scoop? Comment below or Send us a Tip